A Few Questions: With Your Host, John Dancy-Jones 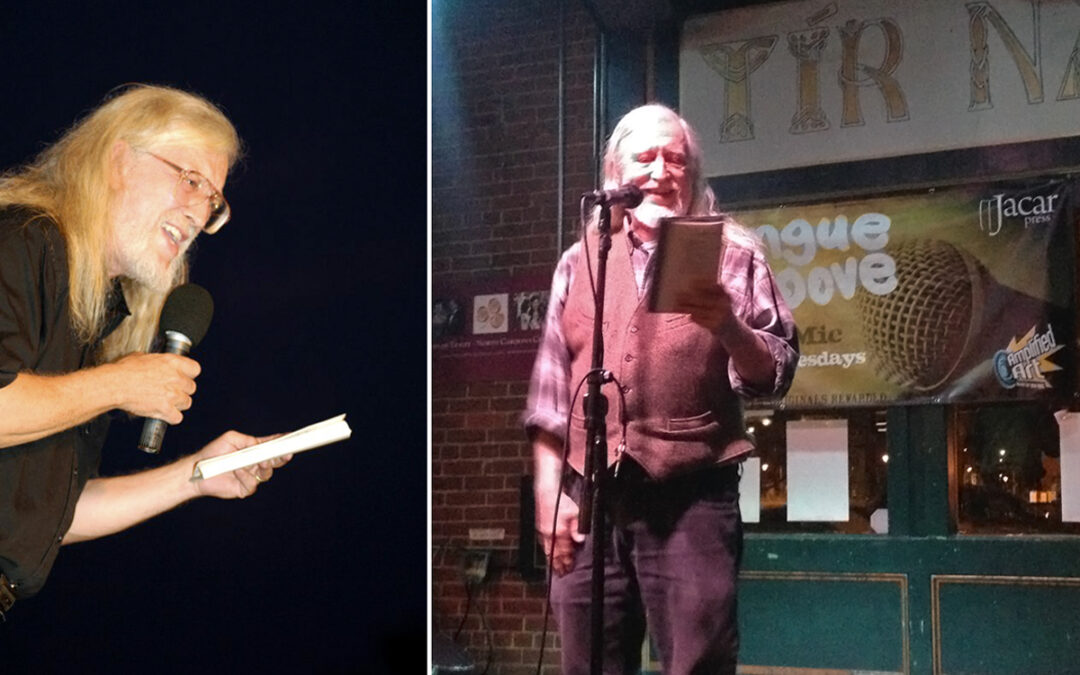 This is the fifth in a series of interviews with some of the best open mic hosts I’ve seen on my informal tour of open mics across America.

This week is a bit different. John Dancy-Jones hosted an iconic open mic at The Paper Plant in downtown Raleigh, NC, for eight years in the 1980s. I never saw him host but the night he came to my open mic, his performance had me leaning in and smiling like I’d just been reunited with an old friend.

Even better, I later learned that the building that once housed The Paper Plant is now home to the Visual Arts Exchange (VAE), an art incubator and gallery that just happens to be the new home of Tongue & Groove, my very own hometown open mic.

So this week, we get a little perspective on what open mics have always been about. Something I’ve been looking forward to for weeks…

Tell me about the open mic you ran—the rules, the structure, the venue, that kinda thing.

When Bob Rogers, Statesville native and West Coast radio producer, walked into my new Raleigh bookstore, The Paper Plant, in 1982, he said, “Here is the bookstore. Where is the reading?”

Within weeks, he and I, along with Geneva Green, a high school apprentice/intern, had started a weekly open mike reading. GeGee walked across the street from the bookstore and asked Gloria to let us use the basement of her luncheonette for an open mike reading. After brief stints at other venues and a good long run at The Berkeley, the reading landed at the enlarged (and bathroom-equipped) Paper Plant bookstore for the last 5 years of a nearly 8-year run.

Weekly! Maybe a break in July. For almost 8 years! But it was part of my job running The Paper Plant.

A Little Flattery and Some Introspection

I read an article you shared about open mics in Raleigh and your long-running event at The Paper Plant and it sounded incredible. What do you think made it so special?

It was such a needed thing! This was the Reagan era, called by Doonesbury an armpit of a decade: UNC was going all MBA, Raleigh was a very sleepy banking/guv town, and the Republican feds had declared ketchup counts as a vegetable on a school lunch!

Raleigh alternative arts, including early zines, were gearing up for battle and the reading became a magnet for those energies. The book arts stuff got us an awful lot of press—I have stacks of articles in publications local and statewide—and that helped very much.

Let’s Get Deep and Personal

What, in your opinion, is the purpose of an open mic?

An open mike is a public voice for the private individual. An important part of being or becoming a city is being open to all voices. At an open mike, anyone can have their say.

Do you have a philosophy or a manifesto as a host?

From the website: “Many of our writers regularly feature as performance poets. We seek to present an alternative take on the publishing process, looking for non-academic, even non-literary influences, in a search for poetry as an oral art, in a belief that poetry is an essential and multifarious expression of life.”

What would you say are the 3 biggest keys to success—by which I mean longevity—for an open mic?

Consistent presence, for sure. And though weekly was a bear, I think it was very important. People could pop in when the magic had hit, and then we benefited from magic.

Alcohol is a pretty fundamental of the open mike as I envision it, and that lubrication helps build steady attendance. (An aside: I realized over the years that a small potential contingent would not come to my reading because of the smoking, which I regretted greatly.)

Third, ringers. You need a seeding of really decent stuff, and strong whiffs of talent, humor and professionalism.

Have you ever written a poem about open mics? If so, is there a link or video I can share?

John answered this question by sharing this poem: I Dreamed I Was Emcee.

Tell Us a Story (or Two)

What’s your idea of a Damn Great Night of open mic—in terms of talent, audience, or anything else?

The thing that never ceased to amaze me was the steady trickle of first-timers, reading in public for the first time. Once in a while they would be the real thing and become regulars. That was always a treat.

The biggest audiences weren’t always attentive, so there is a sweet spot there. I always liked having music, though a primarily musical event is not an open mike in our sense. (I like the term spoken word a lot.)

The very best part was the utter surprise and/or amazement of the unexpected.

What’s the most bizarre or magical thing you ever saw on your stage?

The essay describes several, including the anarchists from Madison with their wild lettuce and the wizened couple with their 10×4 ft. banner of front pages, music posters, and travel documents.

My personal favorite memory is Clyde Smith reading his long poem about homeless people, pausing to strip off layer after layer of clothing down to his skivvies. (At this time downtown Raleigh was riddled with little nesting sites created by the homeless—including the abandoned bread truck I mentioned recently.)

Has your open mic been the catalyst for creative collaboration among your regulars or semi-regulars?

I am very proud to say yes. The venue helped generate the performance art duo, Joan Krawford Fan Club, group performance art on social topics, and occasionally a workshop atmosphere for regular poets. The art on the walls provided vital context for the reading. It was a thoroughly integrated mix of creative activities.

How hardcore do you think a host should be when it comes to enforcing open mic etiquette?
I would get livid if I thought an artist on my stage was being treated unfairly, so I had to work on that and try not to be a jerk.

Read effectively! Strong energetic presentations capture audiences—if you get their attention, they will give it to you. I have heard so fine poets give weak oral readings. My reading series was notorious for strong presentation, humor, and performance art.

Have you ever had to kick out, or ban, a performer from your event? If so, what for?

Nah, but at The Berkeley women were hissing from the audience as Billy Odom read his weird juvenile satire. I thought he was funny and later published his chapbook.

What’s your strategy on nights when, for whatever reason, the list is really thin? Say, fewer than 5 performers.

That’s when it is Kenneth Patchen time! And we were lucky to be in a great used bookshop! Maybe a favorite sonnet (one of the mean ones about the dark woman) or maybe read some Ed Bogosian. Some of my favorite nights were intimate sharings.

Show Me Your Wishlist

Any plans to launch an open mic where you live now?

Nah, but I’m on the Emcee sublist for a couple. I spent a year regularly attending the two local readings I like and getting to know the emcees. Asheville has a rich scene.

If you could perform at (or just attend) any open mic, slam, or other poetry event in the United States, all expenses paid, which one would it be?

St. Marks in New York City, for sure (via Time Machine)—magical and long enduring by all accounts. I understand the slams got started in Chicago, so I’d like to check out that scene. And after all of Bob’s stories about the West Coast (he ran an open mike for years out there), I’d like to check out the North Beach scene in San Francisco.

John Dancy-Jones continues to run The Paper Plant, now out of Asheville, NC, where he makes hand-laid recycled papers, notecards, and blank books. He also offers papermaking and bookarts workshops. Check out their Etsy store and/or follow The Paper Plant on Facebook.

And if you happen to be in Asheville, go find yourself an open mic. He just might be there.