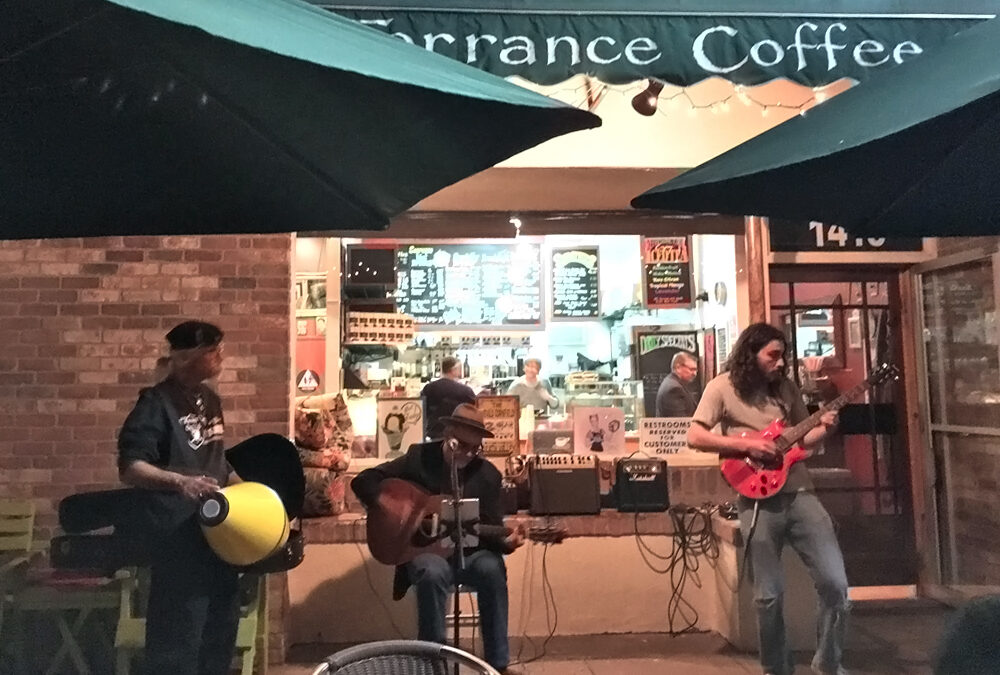 Someday my well-meaning, risk-averse family and friends will learn that it takes a lot to harsh my open mic love.

Despite warnings about LA traffic and “bad parts of town,” I once again managed to parlay a little work travel into an open mic opportunity and come out the other side intact.

Success this time was driven—literally—by my amazing boss (who also came along a couple years back to Chicago’s Green Mill, before I really took up the quest in earnest). Between Siri and the LA-quality swagger with which she handled our rental car, we made it just fine thankyouverymuch from El Segundo to Old Torrance for what turned out to be a magnificently funky night at Old Torrance Coffee and Tea.

Let’s just say LA brought the quirk in a big way and, as I often do, I ended the night a little in love with the host, the regulars, and the vibe—and with open mics on the whole.

“This is California. We don’t really have a structure.”

…said host Mike Muñoz when I checked in early to find out how they ran things. But that’s not always the case. In summer, he told me, the list fills up—18 ten-minute slots from 6-9pm every Thursday.

Mike and his open mic have been gracing the sidewalk outside the small, colorful coffee shop for about 3 or 4 years. The night I went was their first after a ~2 month hiatus on account of cold and rain.

It was a small crowd of regulars—small enough for hugs all around every time someone arrived or left. Small enough that Mike didn’t keep a paper list but rather nominated people to play next based on order of arrival. Small enough that the lone barista came out to listen and smoke, nodding to people who made their way in for a coffee that he’d come help them after the next song.

After Mike’s warm-up set with an early 20s hipster on electric and the incredible, gray-ponytailed and beret-and-shades-wearing Ronnie on the yellow bongos, I was first up (and only poet of the night).

From there, it was almost all funky covers, despite the clear statement online requiring originals on account of occasional visits and fees from ASCAP.

In a lifetime first for me, I was (with the exception of said hipster and a female singer about my age) the youngest performer on that sidewalk stage…by about 20-30 years. My favorite sets included:

The assembled few-but-willing sang along on the chorus of any and everything.

They were friendly. They were fabulous. And they were way, way funky.

If I could have one impossible wish, it would be to adopt those men as my collective grampa and make the trip for holidays and open mic-friendly weather.

Sometimes after an open mic, friends who weren’t there ask how it went, usually meaning, “Did they like your stuff” or “Did you get a lot of applause.”

On a low-key night like this, there’s not much applause to be had. But sometimes you get something even better…

On that night, my poems reminded Mike of a couple of his originals about tough women—including one called “Last of the Beauties in a Long Line of Spies.” And I scored an invite from a woman in the audience to a place called Susie’s for the Taco Tuesday open mic next week.

I know I’ve said this before, but no lie, friends: It doesn’t get much better than that. Unless, of course, I could get a copy of those songs Mike played.