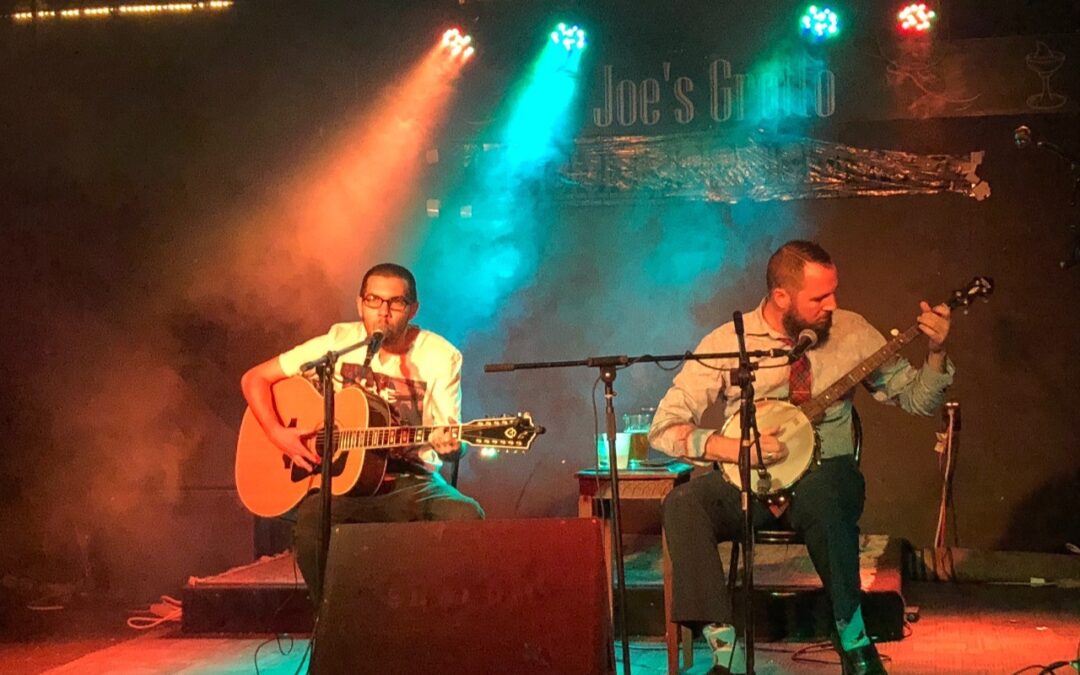 When I staked a claim to this whole open mic tourism thing just over 4 years ago, it seemed doable to make 50 open mics before I turned 50.

But as the Germans say, work is work and schnapps is schnapps.

Still, 30 by 50 isn’t too shabby. And I’m delighted to say I hit that mark right smack on my birthday, thanks to a surprise trip to Phoenix.

Where I found the Acoustic Open Mic at Joe’s Grotto.

Joe’s Grotto is a bar and live music venue. According to our stand-in host Chris (Joker, the regular guy, was off that night), the Grotto has run a weekly open mic since they opened 20 years ago. Some claim it holds the record in Phoenix.

It’s dark in Joe’s Grotto. Darker still in the corners where the pool tables are. Everything that isn’t black is made of neon. When I walked in, the bartender had a radio show called Liquid Metal racked up to 11. They feature local bands with names like Virulent, Ironkill, Scattered Guts, and Gargling Jellyfish.

Okay, I made up that last one.

Ten feet away from the main bar, a sign reads FULL BAR. Just below it, another sign says, …yeaahh, we’re out of that.

If you want to feel the vibe with me right now, ask Alexa to play Hatebreed’s “Destroy Everything.”

Hands down, Joe’s has the grittiest atmosphere of any open mic I’ve done to date. If I hadn’t confirmed in advance that poetry was welcome, I’d have doubted my odds walking in.

OH MY GOD THEY HAVE A FOG MACHINE

As with all the music-heavy open mics I’ve done—Gypsy Coffee House in Tulsa, Deep South in Raleigh, Front Street Taproom in Fargo, to name just three—the slots are long. 15 minutes, give or take. And they have everything you’d expect of a concert venue: Sound board and staff who know how to run it, monitors, multiple mics and inputs, speakers the size of a phone booth.

This is no coffee shop where your lilting guitar will get drowned out by a milk frother. Whatever you play on stage at Joe’s Grotto, you will be heard.

And if the host/sound guy/lighting and effects guy is feeling froggy, your hard beats will be accented by synched stage lights and a no-shit fog machine.

Sadly, the hard beats of a poet aren’t enough by which to drive a light show or summon fog.

Because I suspected this would be the case, I totally meant to buttonhole Chris from the stage to see if he’d do me the honor. But somehow I forgot.

Leaving me with what may prove be my biggest—possibly my only—regret as a poet.

I Dropped My Pick Once, Back in the ‘60s

As we made it down the list, I’ll admit I was surprised to find that Phoenix’s local talent didn’t all take their cues from the atmosphere at Joe’s.

Yes, someone covered Alice Cooper. And yes, a magnificent old rocker with white hair long enough to tickle his scapula and 7 of 10 fingers adorned with skull rings sang us “The Anarchist Blues.” 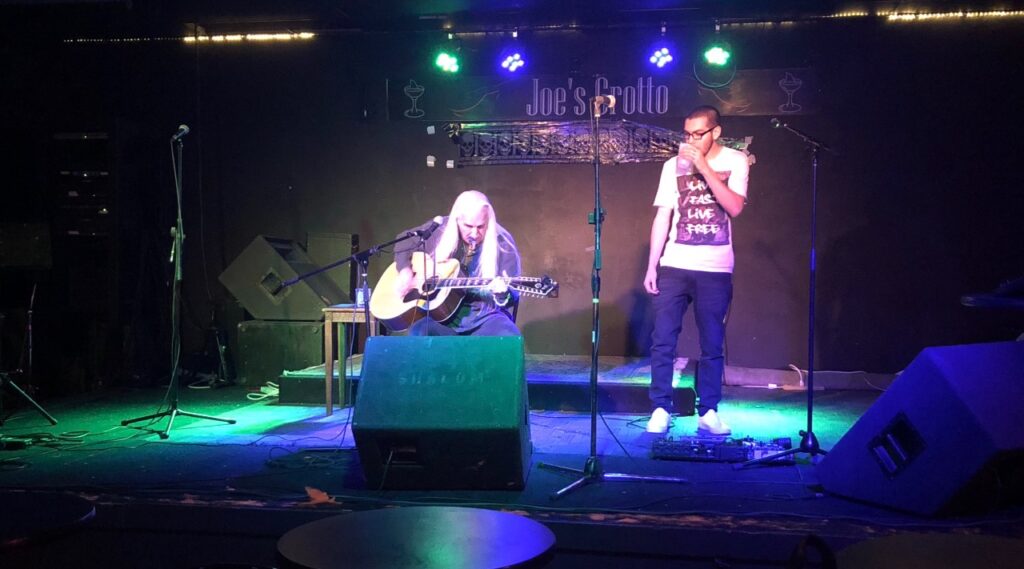 But there was so much more…

Around that point, the Marine fell asleep on his cane, missing a couple Jethro Tull covers played by a natty old cowboy who dropped his guitar pick between “Skating Away” and “Thick as a Brick,” resulting in some friendly shit-talk from Chris back at the sound board.

I almost never leave an open mic until the host says goodnight.

For one thing, the night usually gets weirder as it goes on. Late arrivals, poets who require a little goading or Dutch courage, or (like that night in Gainesville) that one regular who’s so damn good he (or she) always closes the show because everyone wants to hear one more and no one minds if the set runs long.

At Joe’s Grotto, I made an exception. We were at least 3 hours into the night when that banjo player returned for a solo set. Apparently ill about the behavior of some folks in the crowd, he led off with a marginally hostile hand gesture and the words, Hey, billiards fucks in the back…

Now, I’m sure Joe’s staff know how to manage discord in a crowd, and I do love a story with a dramatic ending. But if I learned anything from slinging drinks in rowdy country bars back in my 20s, it’s that Kenny Rogers was right.

Sometimes it’s better to walk away.

So I slipped past the side bar and out the patio door, stoked by the reliably bizarre magic of another night of local talent in a city with plenty to say.