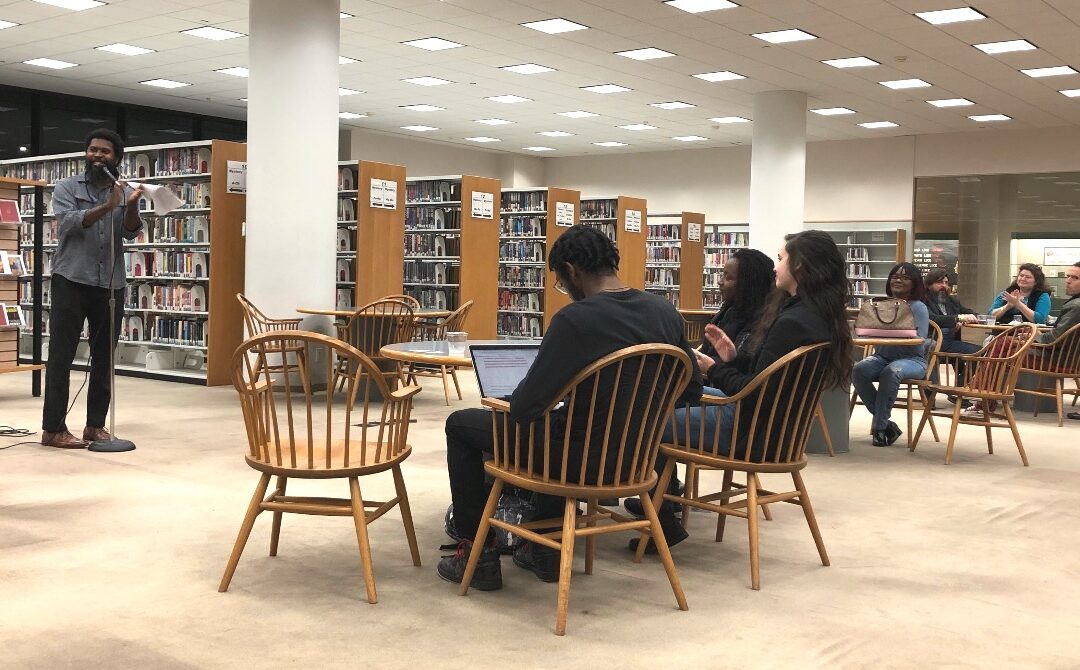 Remember when I said it can be hard, in some states, to find an open mic?

Hosted by the city’s clearly amazing public library system and held on the first Friday of the month, Bards & Brews may be the most findable, most well-promoted and actively documented open mic in the nation.

You can find them on Facebook and on the library’s calendar of events and weekly newsletter. And over the event’s near-10 year run, it’s amassed a ton of local coverage, including a feature on its host, Voice Porter, in the Birmingham Times.

Since my earliest months as an open mic tourist, I’ve been stalking this one. And finally, my work-and-mom schedule aligned with the weather forecast for the Southeast, and I was able to make the 8-hour trek…

The first thing that makes Bards & Brews unique is that, like the storied craps game in Guys and Dolls, it doesn’t happen in the same place each month.

The night I went it had looped back around to its original venue at the central library downtown. But it makes rounds at other branches, including one at the city’s botanical gardens, as well as the museum of art, and a few participating breweries (more on the beer in a sec).

The event’s nomadic nature in no way dampens attendance. Rather, it gives open mic goers all around the county a chance to lend their voice or their ear the magic, and the event is crazy well-peopled every month.

Crazy as in upwards of 100 people on the regular.

And that—if you consult the glossary in the Official Open Mic Host’s Manual (which should totally be a thing)—is the definition of “crazy well-peopled.”

Poetry, Sure, but Beer…at the Library?

But Anna, you say, how can this be? Libraries don’t allow beer.

Well, I can’t say for sure, but my working hypothesis is that Birmingham must be home not just to eager poetic talent, but also to the coolest freaking librarians since, I dunno, Casanova. Or maybe Batgirl.

And as our host, the gracious Voice Porter, pointed out, your usual Library Hush Rules do not apply at Bards & Brews.

Poets aren’t subject to topical or lexical restrictions, and we the audience were encouraged to exercise all the tools for giving energy back to the performers—the snapping, the clapping, the hooting, and even a Whitmanian yawp or two.

The Rundown and the Soap

For all you aspiring open mic tourists, here’s what you can expect every first Friday at Bards & Brews:

And then there’s the matter of soap.

Bards & Brews are fans of SOAP. They invoke SOAP every month. And they advocate the regular practice of SOAP in one’s daily life, for its renowned restorative powers.

SOAP—short for Support Our Artists Please—means showing up for local artists, buying their work, donating via Patreon, and otherwise giving local artists the tangible encouragement they need to keep doing their thing.

In the immediate context of Bards & Brews, SOAP takes the form of a collection basket passed around to give the audience an opportunity to show our appreciation for the featured performer in the form of legal tender.

So the next tine you’re at an open mic, drop a dollar in the hat marked “Donations,” follow a musician you like on Spotify, download a song from iTunes, buy a poetry chapbook, or send ’em a couple bucks via Patreon.

I use the word magic a lot when I talk open mic, because more than anything else each night is a stitching-together of magical moments.

And in this respect, Birmingham more than earned her nickname.

In addition to poems that ran the gamut of topics—from god, children, and fathers, to Salvador Dali and marijuana, a couple performances stood out like tall, ephemeral monuments:

And in the evening’s most memorable 7 minutes, local poet Jahman Hill did two poems from his one-man show “Black Enough” (bound for the Bowery in NYC and, let’s hope, to other venues and cities after that).

One of those poems was a sestina about Trayvon Martin that created its own gravity, words raveling and unraveling within the classic form in a way that built, for me, a dissonance at throat and gut level.

Somewhere mid-way through, I stopped breathing, which I know only because, when the poem was over, I was surprised by a sound coming from my own mouth.

One of those spontaneous exclamations. And a sure sign you just heard something you’ll not soon, if ever, forget.

So Worth the Drive

And if you’ve read any of my other posts, you know already that that’s the way it is with open mics.

Almost without exception, on any given night in a coffeehouse, taproom, or even on a sidewalk…in a big city like NYC or a small town like Paducah, KY…if there’s an open mic underway, you can be sure something extraordinary is happening.

Something worth a drive across town, if not the Southeast. Something more than worth the price of admission.

Something you can get at any open mic, and absolutely nowhere else.