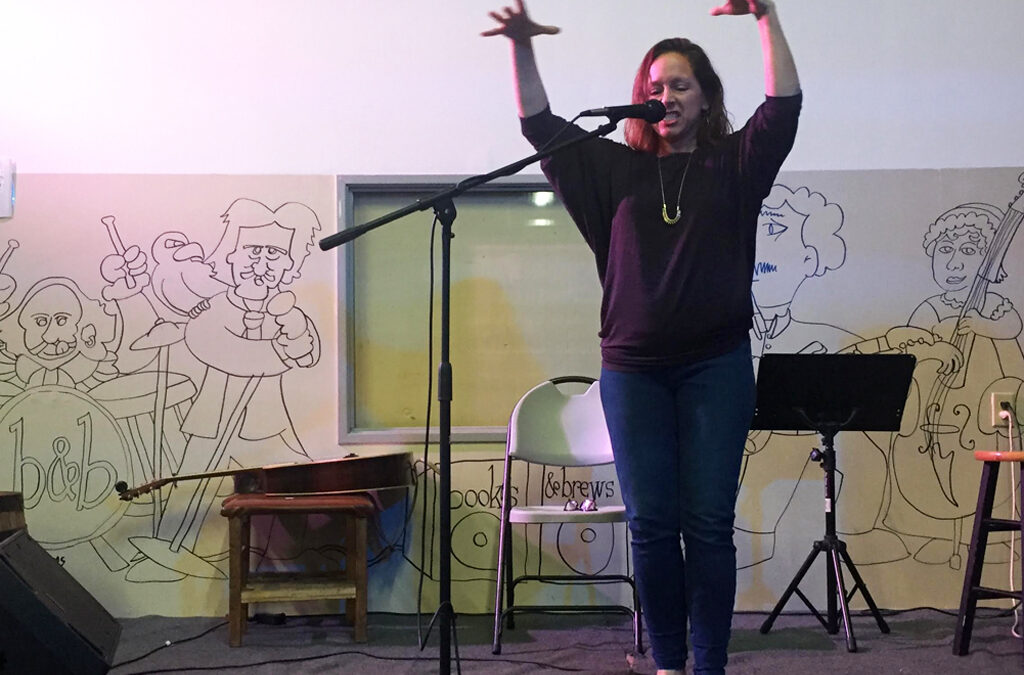 Either I’m getting better at this or I’m on a hella lucky streak. Because once again I find myself adding another open mic to my Gotta Get Back There Someday list.

This time, it was the standing Thursday event at Books & Brews in northwest Indianapolis.

A business unlike any other I’ve heard of, Books & Brews is part used bookstore, part brewpub—with tables for gamers in the front and a side room with a little stage for music shows and an open mic that’s been a weekly thing since they got started three years ago.

An all-ages event where toddlers and adults alike were prone to spontaneous dancing, it was the perfect venue to bring along my genetic fan club (i.e., my daughters).

Our host for the night—apparently to his surprise—was Brent. I couldn’t tell if he’s usually the sound guy or just a regular attendee, but he’d somehow been pressed into service and did a fine job of keeping things moving (including running sound) and making the performers feel appreciated.

And as all five hosts recently interviewed here noted, this is a mission-critical skill.

Far as I could tell, I was the only newcomer that night. Everyone was on a first name basis, there were fluid duets and semi-spontaneous harmonizing, and just about everyone was wielding one of Books & Brews refillable mugs.

Upon hearing I intended to read poetry, Brent assured me that this was “nerd central,” that poetry wasn’t unusual, and that last week an acting troupe staged a scene that was well received.

He told me later that national touring acts drop in more than occasionally, likely on their way between Nashville or Cincinnati and Chicago and looking for something to do.

Made total sense to me. It’s an easy open mic to find and easy to get to.

Behind the stage is a mural that totally captures the Books & Brews spirit. To wit, a custom rendering of Shakespeare on drums, Jane Austen on upright, Vonnegut on lead guitar, and Poe (complete with raven) on vocals.

Thusly accompanied, the line-up was nearly all singers with guitars, plus one magnificent blues duo with guitar and a Mississippi saxophone on what I later learned is called a bullet mic.

NB: Interesting factoids about music gear are an unheralded side benefit of open mic nights.

Anyway, said bullet mic really made the harp licks come through, especially on their rendition of my new favorite song, the “Oreo Cookie Blues.”

As is pretty standard for music open mics, slots were 3 songs or 10 minutes. But the list wasn’t full so Brent was pretty loose with that and we all got a little more than even we bargained for. Covers ranged from from Lucinda Williams to Hendrix to Pink Floyd to Buffet to my personal favorite of the night, Triumph’s “Magic Power,” as sung by our host Brent.

Aside from me, the only non-guitarist of the night was one DJ 3PM, who held a digital turntable on his lap and stitched a dozen classic ‘80s rock tunes into 10 minutes of a pretty awesome reverie for those of us in the over-40 set. And I wasn’t the only one singing along, so that was fun.

Gotta admit to being pleased as hell when, following my set, Brent pronounced it to have been “another classic Books & Brews moment.” Which I interpreted to mean my closing cover of Julian Stannard’s rather bizarre poem “The Gargantuan Muffin Beauty Contest” was the oddest thing on stage that night.

And although my fan club was flagging big time, I like to think that back there behind me, Vonnegut was totally diggin’ it.