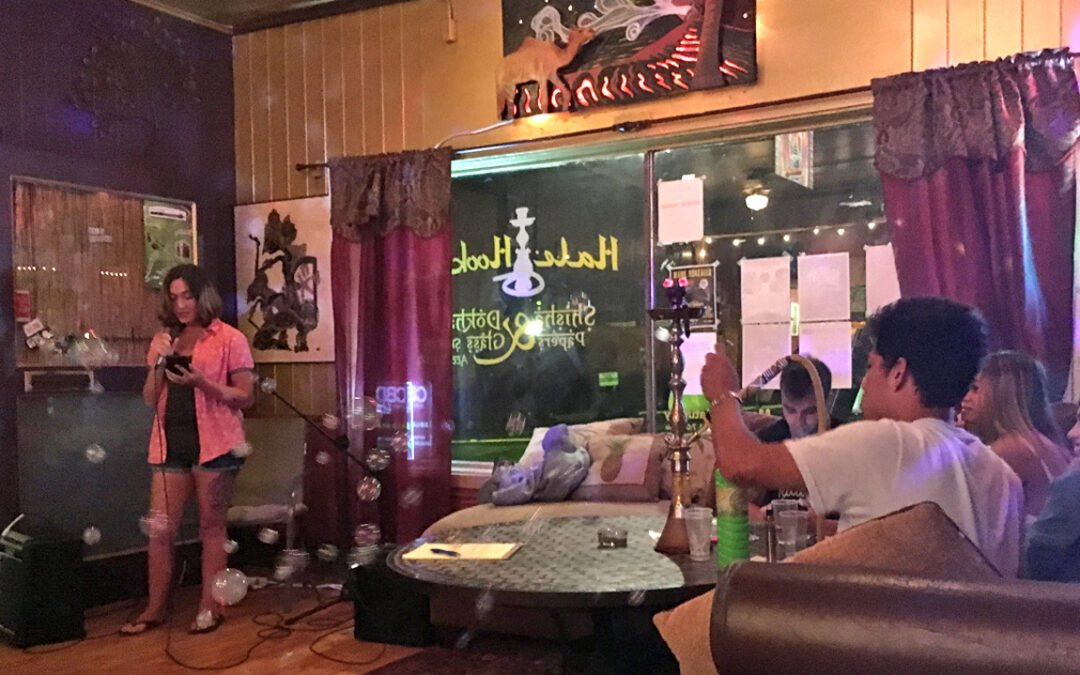 For the open mic tourist who, by definition, does this for fun and at her own expense, the toughest thing is to synch up poet-friendly open mics with her travel schedule. Lucky me (in so many ways), my stay in Hawaii gave me a second opportunity to see how islanders do open mic and hear what her poets have to say.

I don’t know how Hale Hookah in downtown Hilo compares to other hookah bars, because it’s the only one I’ver ever been in. A roomful of tobacco connoisseurs and fancy pipes isn’t the safest place for a ex-smoker with weak lungs she earned the hard way.

But given I’m 30-plus years out from my last cigarette by now, I figured I’d take the risk.

A Second Encounter with the Hawaiian Jukebox

That’s right, folks, at my second open mic in a state 5,000 miles away from home, I followed the same performer on stage as I had at Hilo Town Tavern two nights before.

He wore the same shirt and played the same songs and I got the sense that he’s a fixture at Hale Hookah—played an extended opening set and closed down the show with another extended set at the end.

I was happy to see a familiar face and, I confess, to hear the Power Rangers theme song on ukulele one more time.

Hale Hookah advertises an 8:30 pm start time for its Wednesday open mic. That it didn’t start right on time is no surprise…very few do. Still, the exchange that preceded the opening ceremonies stood out:

You wanna host, asked a man sitting in a booth of a man just walking in?

Have we even started, asked the new guy?

Somehow they decided who would host and it turned out to be one Tom Campbell, a comedian from Texas who did a nice job stretching things with just a few performers, even if his jokes were kinda predictable.

Did I Mention Unstructured?

I didn’t get a chance to chat with Tom before he kicked things off, so I can’t speak to any backstory on Hale Hookah. I’d signed up as #5 on the list but there was no one in slots 2-4, so I was summoned to the stage quicker than expected and had to ask my most basic questions from the mic:

So what’re the rules, Tom?

Is there a time limit?

So I can just sit up here and read poems until you get sick of me?

When a Poet Goes Long

For the record, I believe that unless you’re a feature and everyone in the room came specifically to see you, 7 minutes is a polite, audience-friendly maximum for a poet. I don’t care if you know everyone in the room or it’s your birthday or if the slots are technically 15 minutes or if the musicians are going over by half.

Listening to poetry takes a bit more concentration than music, see, and even a good audience can only hold off on bathroom trips, drink orders, chit-chat, and other things that interfere with that concentration but for so long. So I read five short-ish poems and said the customary thank-yous.

The poet who followed me, however, gave the lie to my dogma.

She was a regular and the assembled house seemed undaunted by her initial dozen poems, the four-part narrative that followed, and the two-parter that followed that. In fact, when she took the mic, one guy at Tom’s table (who surely knew what to expect) fetched a small drum box from a back room so he could add to the snapping that followed each of her pieces.

Way to know the room, Cassie, and good on ya’.

While Cassie the poet did her thing and comedian who came after did his whole set with his eyes closed, the rest of the room passed pipes and blew bubbles filled with hookah smoke. One table had a pizza delivered.

We drank the beers we’d brought (Hale Hookah is BYOB) and the hookah tenders came around periodically to reposition and replace little coals that looked for all the world like orange sugar cubes.

When no one took Tom up on the offer to run the list through again, the Hawaiian Jukebox played us out, ending on an original tribute extolling the virtues of Hale Hookah.

With which all the regulars smoked and sang along…