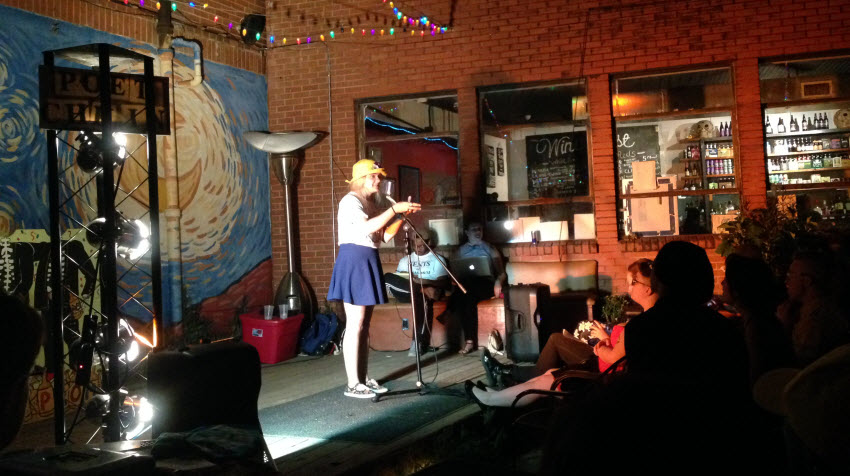 No matter how many times I tell people that you never know what to expect at an open mic, I still get surprised. Lucky for me, this is my favorite state of mind, because at Mic Check Poetry, the weekly open mic held near Texas A&M University at Revolution Café, it happened again.

And it was just what I needed after the disaster that was Poetry Underground in KCMO just a few days earlier.

In many ways, it was like Oakland, the Nuyorican, and other open slams I’ve seen— a generally college-age crowd, judges recruited from the audience, emotional performances, a ban on props, a time- and scorekeeper they called the Voice of God, and much encouragement for snapping, clapping and hooting.

But this time the format wasn’t the typical 3-minute slot. They called this a “1-2-3 slam”—first round the poet gets 1 minute, second round she gets 2 minutes, third round 3. Similar (she said after Googling) to the rules of the Individual World Poetry Slam.

Despite the fact that I’d been Twitter-stalking this open mic for a year or more, this was a total surprise. My plan had been to read one or two pieces that really need an intro and I hadn’t timed anything.

Fortunately, I tend toward short poems anyway, which makes them easier to retain. And because I’ve had to scramble and punt a few times at other open mics, I’d stored a handful of poems on my phone before leaving home—kind of like packing extra beef jerky on a hiking trip.

Our host MadiMae wore a cheerful yellow hat that matched her energy. She reminded us to respect the mic, to tell “all the things,” and to clap for the poet not the score. She made it clear when the list opened and when it closed, gave the poets a quick brief on the rules, and was happy to have a bunch of newbie performers and a couple judges who’d never even been to a slam before.

MadiMae excelled at filling just enough time for the judges the write down scores while still keeping things moving smartly. She kept the energy and humor level high and endeared me to her forever by encouraging us to boo linear time when a poet got docked points for going over the limit.

In addition to the format and Maddie Mae’s hosting skills, a few other things stood out as unique:

All in all, it was a great night. The crowd was sizable and attentive, and they mostly hung through to the end. Several of the poets were using this slam as additional prep for an upcoming event, the Texas Grand Slam, so the talent was strong (even if the subject matter was fairly predictable). And despite the stupid assertion by one audience member that judges should “score the topic not the words,” the strongest voices and best writing prevailed.

In keeping with my pattern at slams, I didn’t make it to the final round (even though my best friend got tapped as a judge and gave me an utterly biased 10.0 on my second poem) but I did get a little audience love and video proof of same.

Honestly, folks, that’s about all I need in a day.