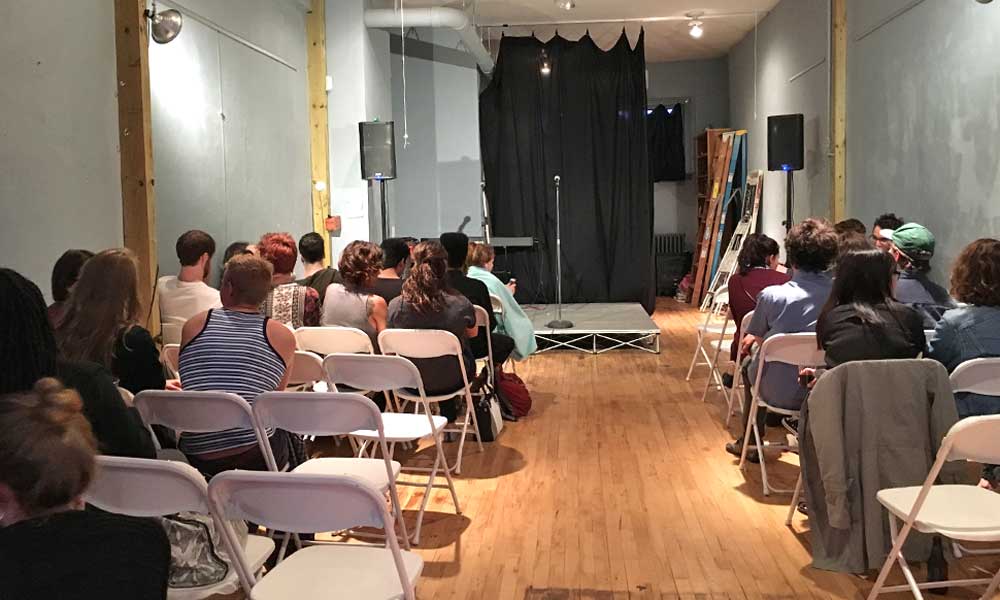 In two years and 16 states (plus the District of Columbia), I’ve struck true open mic gold only three times:  Once, in Norfolk, VA, at The Venue on 35th.  A few months later, in Oklahoma City at the Red Dirt Home for Wayward Poets. And now, in the gorgeous city of Minneapolis, which rolled out for me wide sidewalks and public transit (which I love), long hedgerows of lilac (a favorite of my mom’s), and the New Sh!t Show.

Sponsored by a poetry org called Wordsprout and now in its second year running, the New Sh!t Show takes place in a friendly space called Fox Egg Gallery. It has a fabulous host in Lewis Mundt, adept at building energy in the audience via strategically hilarious yelling.

Seriously, an enthusiastic introduction can make a huge difference for a performer—creating a perfect-fit space on the stage for him (or her or them) to walk right up to and into, and jump off into a poem or song (or skit or whatever).

The New Sh!t Show show has exactly one rule: all performances must be new work. Why is this fabulous, you ask? (Or, for the slammers, so what?)

Well…the thing is, it’s kinda easy to always lead with your best stuff. Your failsafes. The pieces you know best and that tend to get a good response. Even poets who use open mic nights as part of the creative process—and that should be all of us—get lazy sometimes.

If a show’s format forces us to out our less refined work, we get to walk a line between anxious and energized. And that line demarcates a kind of magical no man’s land, where performer and audience strike a deal. The poet knows it still needs work. The audience, they know it too. They aren’t expecting perfect, they just want new. They want to be the first to hear it.

I was told by Lewis that his is part of a series of New Sh!t Shows started in San Francisco, but that in Minneapolis, they swing multi-genre—allowing any type of performance, not just spoken word. That night, after I once again played the part of sacrificial poet (seriously, this is becoming a thing), we heard from 3 more open mic poets, took a beer-and-bathroom break, and went right into the features.

Did I Mention the Features?

The New Sh!t Show only has four open mic slots, 3 minutes each. The first three slots are on first-come-first-served rules, the fourth is drawn from among the late-comers. (Again proving that my nerdy and often mocked habit of showing up 30 minutes early is a Very Good Thing.) After that come four 10+ minute features selected by the evening’s producer.

On this night, the first feature started with a dramatic reading from Merriam-Webster, “cab” through “cadence”—occasionally turning his body for that Franz Liszt profile effect. He spent the rest of this 10 minutes playing messy piano, singing a cover tune, reciting MFA-quality hyperboles like “let the rabid dogs of rage infiltrate my fortress,” and modeling a pendant he’d made that looked a bit like a squid holding a key.

Self-aware creativity at its most engaging.

After that, a two-woman improv team called Dollhouse did no fewer than 15 mini-skits with only 2 chairs for props and no costumes. They were spectacular.

Up next, Su Hwang, winner of the University of Minnesota’s James Wright Poetry Prize, who read her winning poem, “Elegy,” along with a few others from a new collection called Bodega. She was also spectacular.

At a total now of three, I can still count on one hand the number of open mics on this quest to which I’d like someday to return. It’s a slow-growing list, but when it’s all over I hope to need my toes to number the fantastic nights like this one. Maybe then I’ll run stats on how often you can hope to walk into open mic magic. But as a poet, my bent is always toward the qualitative.

Together, Lewis Mundt and the performers and audience waved a wand in support of something (or things) no one had ever seen before. And together, we were part of, as Lewis put it, “the creative and creating spirit” in the Twin Cities that night.