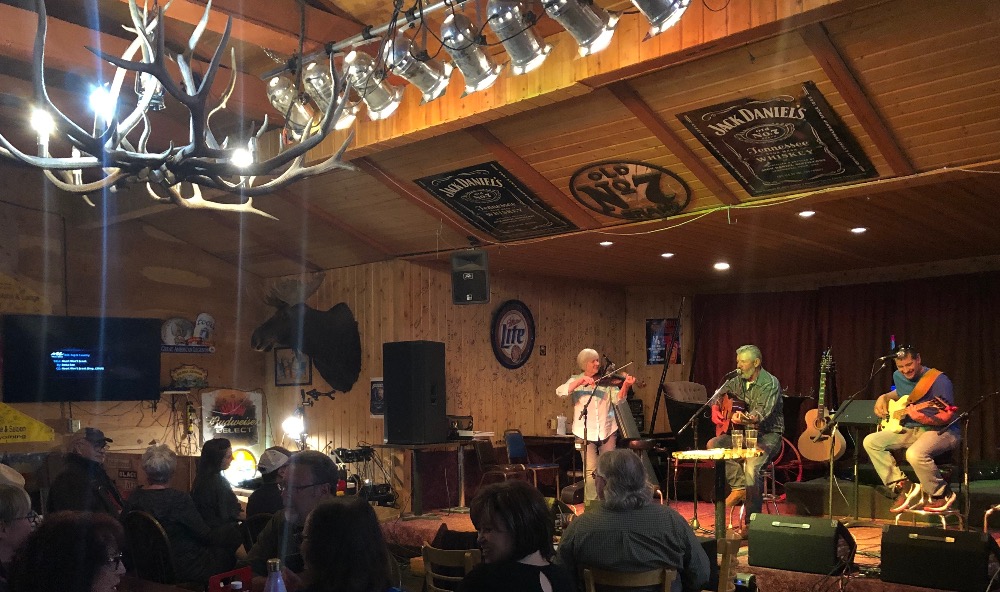 A couple years back, when I found the Riff Raff Arts Collective in Princeton, WV (pop: 5,822), it was hands down the smallest town where I’d found a poet-friendly open mic. A month later, the Paducah Writer’s Group in Paducah, KY (pop: 24,941), though small as my hometown, was a metropolis by comparison.

Both Paducah and Princeton were unique and wonderful in the way of small towns and their artists. And so I learned that, although I may love big cities for all their gritty possibility, they do not have a lock on the open mic market.

Well, friends, I’m happy to say that a handful of musicians and audience members in Alpine, Wyoming bore out my theory.

So lean in, if you will, and allow me to introduce you to an open mic in a town of just 856—one that set more than one delightful precedent.

Of Mics and Moose

For the past few years, every Wednesday the Bull Moose Lodge & Saloon in Alpine has welcomed residents and tourists to “sing a song, play an instrument, or give us a poem or a joke.”

The night I took them up on the invite wasn’t not the first time I’ve read a poem under the glassy gaze of game heads. That happened last summer at Fargo’s Front Street Taproom.

But the Bull Moose has an eponymous ethos to own, and with two massive mounts flanking the stage, own it does.

In addition to the most moose heads evah, the Bull Moose open mic can also claim status as having the…

First Rule of Open Mic: You Will Be Surprised

If you’re new to open mic, it’d be easy to assume that in a small town in a mining and ag state, you’d be likely to hear country. Possibly also Western.

But once you’ve been to a few, you start to understand that open mic is where stereotypes go to die.

Sure, Alpine’s local talent brought out a little Johnny Cash and Hank Sr., a Texas swing number, and a song or two about the perils of loving cowboys and the trustworthiness of rifles and ponies.

But by the time we looped through the list a second time, we’d also heard

And yes, yours truly, as the night’s only poet, which didn’t phase anyone in the room even though, as Louie told me, they typically get only a couple of us in any given year.

With Louie at the helm and Alpine’s open mic regulars thus gathered, it quickly became clear that this was the sort of place you can take a risk or two. And that it was full of the sorts of people who might join in.

The musicians alternated lead and rhythm guitar, harmonized, and cajoled one another to come up, do another, borrow a loaner guitar if they needed to, and other friendly doings that mark the very best kind of open mic.

An on top of that, there was Rick, musical hero of the night (an award I just made up), who’d taken time to prepare the bass line for the majority of the other performers. And who thereby lent a continuity of sound and spirit to the whole night, stitching it together and making everyone’s songs that much fuller. And smiling all the time.

So it didn’t feel like over-reaching, on my second time at the mic, to ask Louie to join me on his 12-string and add a background layer for an old poem about a dream…

(Which, poets, can be an effective technique if you ever need to hush that segment of the audience who didn’t get the open mic memo and unabashedly keeps talking back there by the casino machines. No guarantee, mind you, but worth a shot if you can recruit a friendly musician.)

The Best Way to Close Out an Open Mic Show

As an open mic host myself, I’ll tell you that closing out a show isn’t cake.

It’s late, and everyone needs to go home. But you and the performers and the audience have shared something ephemeral, and every soul there knows that when you all walk out of the room, it’s gonna be over.

I’m almost never ready for it to end.

And I’m not alone. At that killer open mic in Gainesville, one of the regulars told me it wasn’t unusual for their core group to linger in the parking lot, playing on until dawn.

But like the old bartender’s line goes, you don’t have to go home but you can’t stay here. And it’s the host’s job to put a bow on it.

As in Princeton at the Riff Raff, in Alpine they do it my favorite way: With a song. Same song every night, they said, come-one-come-all who would strum or sing along.

Alpine’s choice is the Marshall Tucker Band’s “Can’t You See.” And the night I went, Louie was joined by three others on stage, plus the entire assembled audience, for all 3 verses and several rounds of the chorus.

And for my money, nothing beats a night when you walk out to your car, humming a melody.

Now, if you’re still with me and you’ve got another ~7 minutes to kill, you can watch my first set. And if you do, you’ll find out about midway through that the reason the video is so well-shot is that my friend and professional photographer, Jimmie Crawford, was there in the audience and kindly brought his gear along.