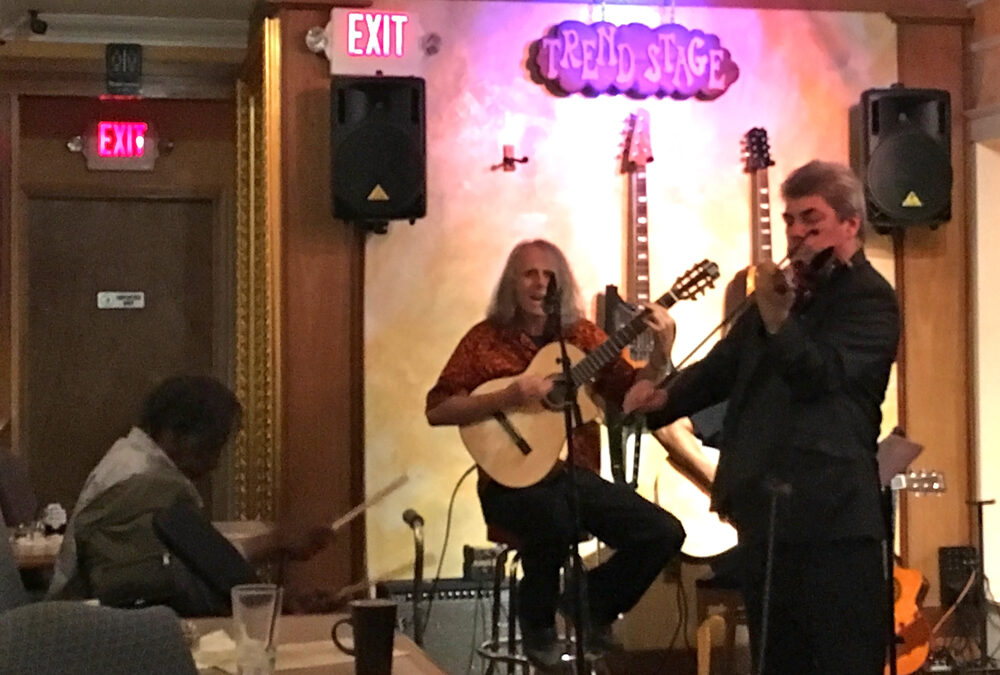 The folks at Trend Coffee & Tea House in Montclair, NJ, don’t say too much on their website about the Wednesday open mic, but all you have to do is walk into the space to see how committed they are to music and arts.

Like a lot of coffee shops, Trend decorates its walls with local art. But they also hang guitars and a backlit sign with the legend, Trend Stage. Turns out the owner Dmitri is a hell of a classical guitar player, as I learned last week when he warmed up the room for a good 10-15 minutes.

Our host that night was Brad, who said they get mostly musicians and poets with the occasional comedian (for which Brad didn’t spare even damningly faint praise, openly admitting they were all awful…and surprising exactly no one).

The list opened at 7 on schedule and after Dmitri’s warm-up set, the show kicked off around 7:30. At peak crowd, around 10pm, the place was standing room only and multiple guitars warming up in the back.

I was the only poet of the night, sharing the stage with mostly guitars, mostly acoustic, and a healthy mix of covers and originals. The one comedian was indeed terrible and the only other non-musician didn’t so much read from his novel-in-progress as describe the scene he’s currently writing—and may have actually written that very night, in longhand, in the cafe.

The crowd wasn’t populated with the best of listeners, but those of us who were paying attention made a creative connection despite the shoeless college girls who never once stopped chittering over their phones.

Their loss if they managed to miss the bizarre wonder of a flamenco version of “Freebird” played by an unlikely trio of gray-haired men on acoustic guitar, electric fiddle, and drumsticks-beaten-on-an-aluminum-cane. (That’s the pic above…taken because I knew no one would believe me otherwise.)

As weirdly memorable as that was, the signature moment for me came when my favorite singer of the night, one Mitch Radler, covered Tom Waits’ “Jersey Girl” and invited us to join in on the chorus.

This was the first time since Mic Check in Texas that someone has invoked a sense of place, that it mattered where we were that night.

And I gotta say, it was nice to leave with a warmly rooted fondness to carry with me up the road and beyond.