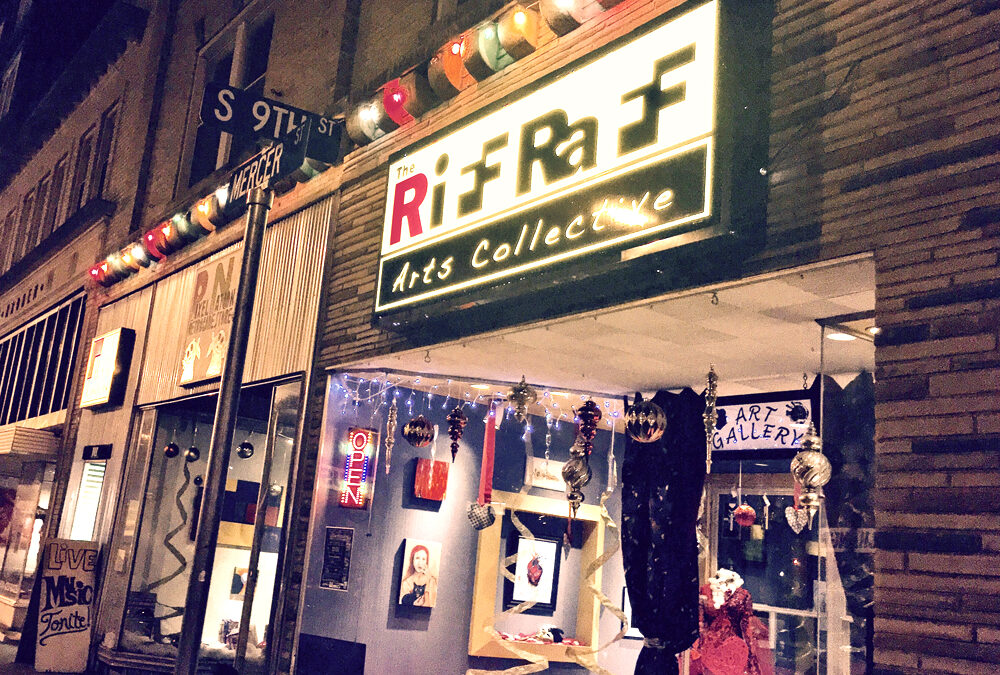 Pretty much every time I head out on an open mic road trip, I invite my two closest open mic-loving friends to come with. Not just because I adore their company, but also because having a witness makes a magnificent night so much the better. And as Kansas City proved, a shared bad experience can be almost as fun as a good one.

Miss them though I did on my trip to the amazing RiffRaff Arts Collective in Princeton, WV, it’s probably a good thing I went alone.

See, I can get a little, um, agitated when I’m at risk of being late. And I will, to make time, forego dinner and comfort stops and pretty much anything else so I don’t miss a minute.

Because I’m obsessive like that, I was feeling pretty froggy that night at the RiffRaff. But even though I was running on a dinner of complimentary coffee and cookies they offered at the door, I don’t think it was delirium that led me to fall deeply madly poetically in love with the space, the talent, and the people who run this incredible show.

The RiffRaff and The Room Upstairs

As their website will tell you, RiffRaff founders Lori and Robert have a lot going on. Among the many ways they find to create community through the arts, they hold an open stage night two flights up from their art gallery in a space called The Room Upstairs.

The Room Upstairs has purple walls, purple curtains, a killer sound booth, a spacious stage, and a nameless angel placed like a keystone over the apron. The assorted flowered couches and ‘80s office chairs give it a living room vibe. The kettle drum at house right undoes that vibe handily and in the best of odd ways.

The stage and the structure of loose 15-minute sets are suited for musicians. Ditto the sound, which was lock tight for every act—from the opening didgeridoo/djembe duet (Lori and Robert, pulling duty as the sacrificial first act) to the a capella soprano to a five-piece electric facemelt that is local band The Magnum Opus.

The audience was perhaps less ethnically and racially diverse than I’ve seen elsewhere, but it did range age-wise from a couple teenagers making out in the back to a few graybeards.

Most important, they all came to listen. Respect for the mic and the stage was clearly a thing, and I saw more than one person tiptoeing on the wood floor to avoid distracting from the performer.

Bless them, one and all.

I Haven’t Seen It All, But I’ve Seen A Lot

Every time I tick off another list of Acts Unlike Anything I’ve Ever Seen, I am amazed at the infinite originality in the open mic universe. The fabulous talent at The RiffRaff only reinforced my belief and my appetite for more upon novel upon different upon how-have-I-never-seen-that-before.

On this night I added a handful more entries to my seemingly endless list of first-evers, including

Why? Because We Love You

Fittingly enough, the French lovers were the last act of the night. Followed only by our host Lori singing the old Micky Mouse Club closing song to signal the assembled to find our keys and our coats.

M I C…See you later.

K E Y…Why? Because we love you.

And I loved them and their space and I think you should go. If not right now then the very next Monday you can possibly make it work. Get yourself to Princeton and get a cup of coffee and some cookies and sink into a flowered couch surrounded by purple walls in a room chock full of originals.

And if you can’t make it to West Virginia, fine.

Find an open mic where you are. Let yourself be surprised at what exists in your own town, what your neighbors spend their time creating and rehearsing, and what it feels like to be there when they share it.