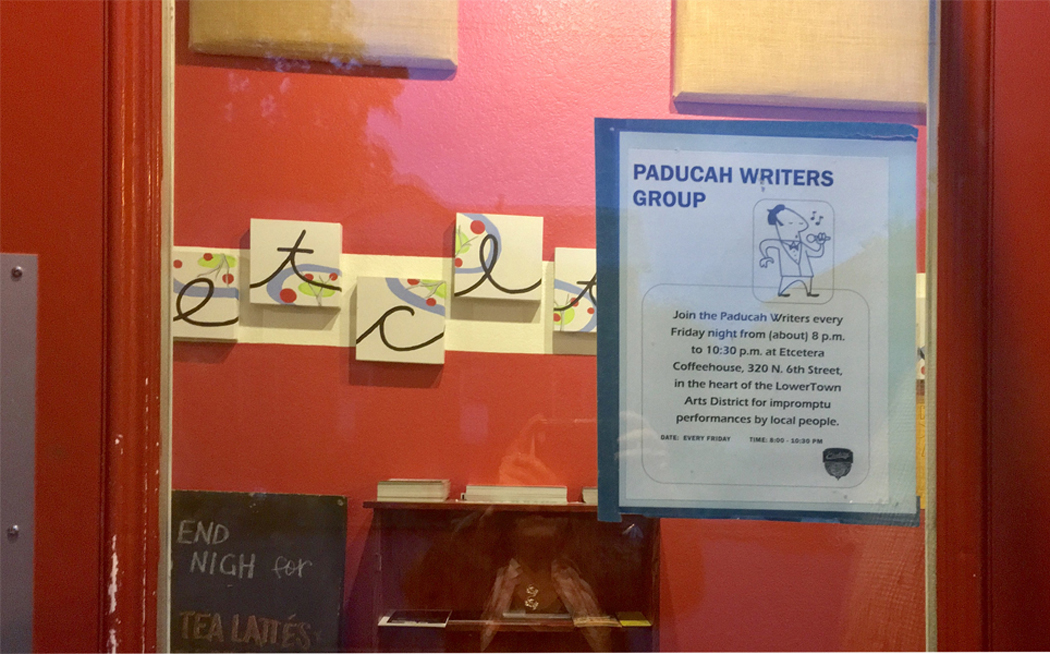 Usually, open mic tourism takes me to pretty big metro areas—Chicago, NYC, Atlanta, Minneapolis, Oakland, OKC. State capitols, cultural hubs, places with lots of bars and coffeeshops and art galleries and poets and musicians and all else it takes to spin up a regular event and feed it with creative energy and nerdy obsessions and love.

Another fabulous case in point is Paducah, KY, home of Murray State College and the Quilting Hall of Fame and the Paducah Writers Group Open Mic, which happens every Friday night at the Etcetera Coffeehouse.

You Could Be Anywhere in the World, but You’re Here

In its ninth year,the Paducah Writers Group is a houseful of friendly eccentrics who somehow aren’t fully aware of just how fabulous they are.

I sat at a table down front with two diehard regulars—a ukulele player and singer named Alisabeth who never misses the show and always signs up first on the list, and her grandmother Mama June (as everyone calls her) who always comes along and happily plays taxi to poets and singers who need a ride home after.

Together with our host Dylan, Alisabeth and Mama June gave me and my companion a warm and rambly, caffeinated welcome. They explained how things work, told a few stories about how PWG came to be, and folded us in like old friends.

Let’s pause here, open mic devotees, to appreciate two types of people: The fearless performers who go first on purpose, and those rare friends who will willingly sacrifice a night to come along to an open mic just to sit and listen. Bless your brave souls and open hearts.

Dylan put it best when he started things off, thanking everyone for coming: “You could be anywhere in the world,” he said, “but you’re here.”

Despite Dylan’s assertion at one point that PWG is like all other open mics, this is only true in that it’s utterly unlike any other open mic. Witness:

Best of all, throughout the evening they circulate what they call the Group Hug. An infinitely friendlier name for an exquisite corpse poem, the Group Hug is a notebook. Someone—that night it was our host Dylan—kicks off a poem and the book makes the rounds for any/all who would seize the creative spirit and contribute a line or stanza.

As the last act of the night, one or more volunteers reads the Group Hug and—assuming he/she/they can make out the handwriting—together performers and audience enjoy an ephemeral co-creation.

Neither poet nor musician should imagine that all the good open mics are in the megacities. And if you live in a small town, don’t dare believe there’s not enough talent or appetite for an open mic to succeed.

Find a coffee shop with a side room. Or a community center or a library or a friendly patron with a big basement. Call all your friends with guitars in their rooms and notebooks in their purses and back seats. Make up some rules.

Show up regular for each other and magic will follow, I just about guarantee it.