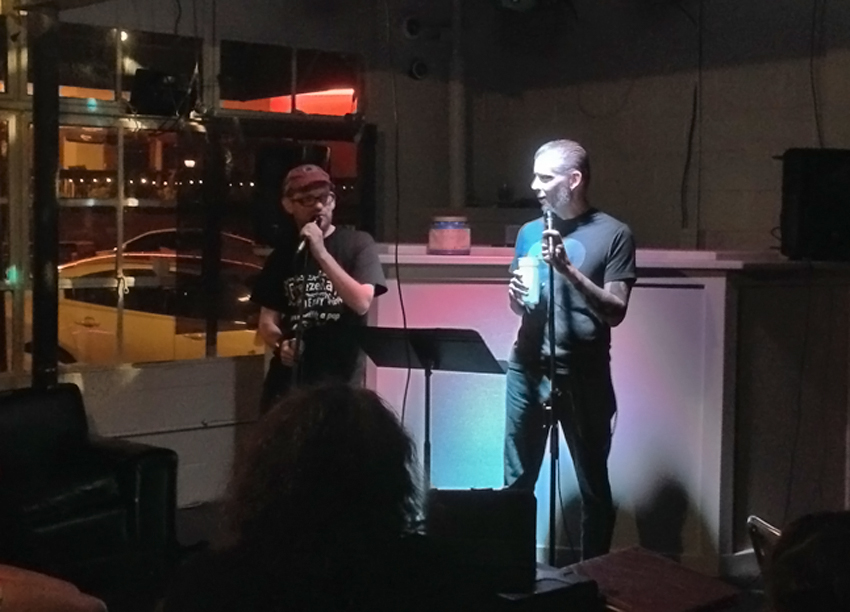 With a name like that, this one had to be good. (And after the prior night’s facemelt at Gypsy Coffee House, I needed a good one.) Blessed Apollo, it was…

In its current incarnation in the back room of a pizza place called Sauced in OKC’s Paseo arts district, the Red Dirt Home for Wayward Poets opens its mic every Wednesday night. They usually have 20 six-minute slots, usually with a mix of poets and comedians. They told me the event goes back 22 years, a few venue changes, and a few hosts.

On the night I went, they’d carved out half the time for a couple features—Victoria Bautista (one of their own, who was headed the following week to represent them at the Individual World Poetry Slam) and a comedian named Joey Zimmerman.

The abbreviated list filled up a little less than an hour before the start time listed on the sandwich board—proving yet again that my mother was right about the importance of arriving early. Yeah, it’s dorky and I’ve probably spent a month’s worth of my life waiting for things to start. But I rarely miss a trailer at the movies or a window of opportunity at an open mic.

So there, late people of the universe.

Two of the Four Geeks of the Apocalypse

The night I went, the Wayward Home was run by two seasoned hosts—Jack Tapestry and Ratpack Slim—who make up half of a foursome (they said) that includes an erstwhile Red Dirt host named Spontaneous Bob and another poet whose name I didn’t catch but was probably equally awesome.

These guys know their hosting shit. They did it all right from beginning to end…

Would-be open mic hosts: If and when you (or I) start up an event of our own, these are tactics to remember. If there was any way I could make it back later this month for their hosting workshop, I /so/ would.

The talent was strong, especially—and I’ve only said this once before—the comics.

No lie, every comic that night was genuinely funny. Vulgar sometimes, sure, but balanced by originality and timing and evidence of having rehearsed. If open mic comics were always like that, I’d stop shuddering every time I see one headed stageward.

My damn luck, I followed a magnificently strange 6 minutes in which a comic dragged a buddy to the stage and serenaded him to the tune of “Endless Love.” I’m not sure what kind of inside joke that was, but it was a special moment of bizarrely hilarious and voyeuristic magic for me and the rest of the audience.

So it goes. You draw the slot you draw. And the audience didn’t seem to hold it against me for chasing spontaneous rom-com slapstick with poems about death and cats.

Sometimes it’s all about the space (like at Deep South in Raleigh), sometimes the space is a friendly uncle who lends a little extra charm to the event (like at The Venue in Norfolk), and sometimes it hardly matters.

Not that the room wasn’t plenty odd. It was dark and bizarre in the best of ways—worn chairs and wobbly tables, an electric cord hanging from the ceiling in the middle of the room, some kind of color light show reflecting on the window in a dizzy circle. Classic near-forgotten back room of every restaurant ever.

But none of that mattered. These hosts and this cast of regulars could’ve made a fantastic night pretty much anywhere (okay, maybe not a Mormon retirement home).

It was the kind of open mic I always hope for: One I couldn’t have imagined on my weirdest day. A perfect way to conclude my midwest mini-tour trifecta.

As our hosts said, in unison, before turning off the microphones:

That’s it. Hang out. Hug a poet. Good night.