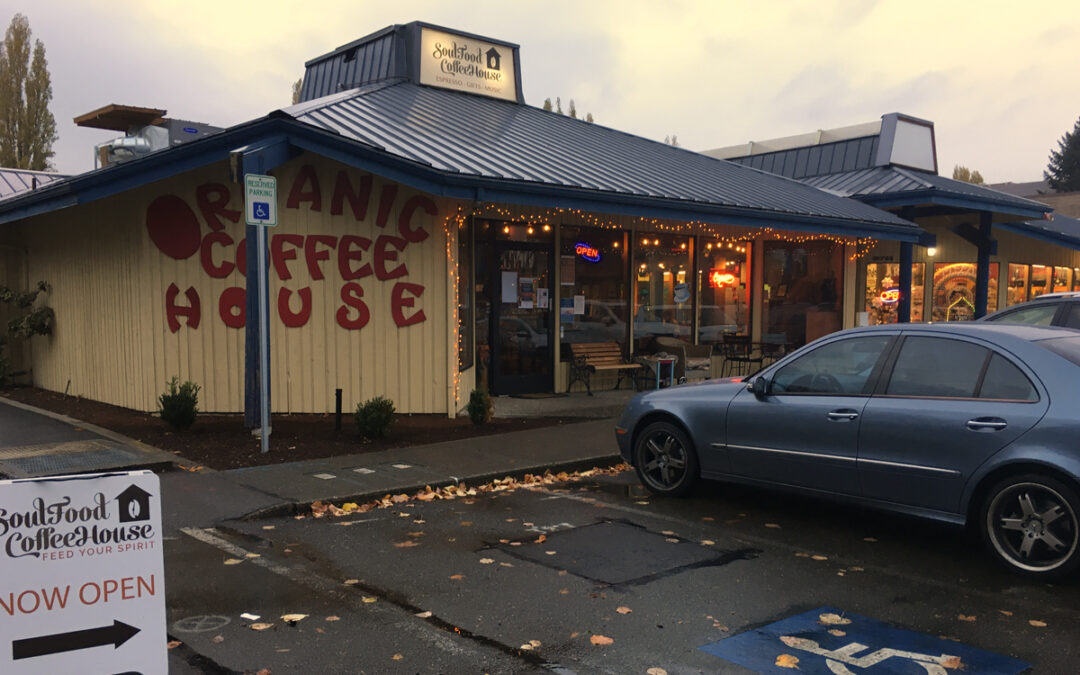 First, a confession: I lost the notebook with multiple glorious lines and quotes captured from this, my latest entry in the open mic tourist logbook. The short version is, it was fantastic and you should totally go, especially if you’re a musician.

The long version? Well, here goes, from memory this time…

The open mic at SoulFood Coffeehouse and Fair Trade Emporium claims a tenure as long as the coffeehouse itself, about 11 years, said owner and host Kevin Oaks (I cheated and found his last name on their website). Kevin is the second owner, pledged to uphold the community spirit imbued by the founders. And while the open mic show no longer runs until 3am (!) as it did in the past, it still carries the torch—making a space that welcomes talent of all types.

Even with it’s new, abbreviated schedule of 6-11pm every second Saturday, this open mic is unrivaled for duration across the 25 states I’ve hit so far. We’re talking 5 straight hours of no-one-knows-what-until-it-steps-on-stage-and-opens-its-mouth, people. A clear sign of commitment to local artists if ever I saw one (and I’ve seen plenty).

The stage is tucked into a corner, with your typical stage stuff plus a lamp post straight out of Narnia and some friendly graffiti on the back side of what I guess is an acoustic baffle of sorts that hangs from the ceiling. Sorta like the walls at Deep South in Raleigh, but viewable only by those who step up to perform and, one imagines, full of encouragement, killer lyrics, and inside jokes. (I’d have needed a stepstool to actually read it, so my guess is as good as it gets on this point.)

An Advance List That Still Manages to be Fair

SoulFood takes sign-ups in advance, starting at 9 am for what they call Tribe members and 4pm for everyone else. And rather than signing up for an order in the queue, you sign up for a performance time.

As I’ve mentioned before, generally I consider this a major red flag, given the potential for favoring the host’s buddies and enabling—if not encouraging—the cardinal open mic sin of showing up only for your own set.

But SoulFood, somehow, was a rare exception to that pattern. By and large, the people who performed were there well before their slot and stayed a good long time after. And the host treated everyone fairly, far as I could tell.

So there you go. A rule finds its exception, but remains a rule even so.

The Wall of Guitars

Like a handful of stops on my tour so far, SoulFood is geared for musicians: 15-minute slots, a wall of acoustic guitars, a sound board, and people who know how to run it and care about your mix. Our host Kevin goes light on the hostiness, mostly keeping the list moving with a little color and minimal intros and back-announcing.

He stepped in once with an extra song or two to get the list back in sync with the sign-up times. (Another limitation, IMO, of letting people sign up by clock time rather than order.)

It’s always interesting to see how a host’s style co-creates, along with the performers, the personality of his or her event. Kevin’s approach to the office of host gives more influence over to the talent and the audience which, there in Redmond, seems to work right well.

For more on hosting style, check out my interviews with some of the best hosts I’ve seen across the US.

Another unique feature of the SoulFood open mic is the livestream. While their archives are a bit behind and  there’s no link to share here for after-the-fact viewing,  for the first time anyone willing to stay up late staring at a computer could experience the show along with me. I had a handful of takers back home in North Carolina, which made it a shared experience rather than the wish-you-were-there-with-me story I usually bring back.

Even better, the SoulFood livestream means you too can catch an upcoming show any second Saturday!

A Customary Litany of the Strange and Therefore Beautiful

This post would be incomplete without a rundown of the most memorable acts of the night and SoulFood had a-plenty, including

But the Open Mic Weirdness Award—which for those who aren’t familiar with what open mics are all about is a a genuinely unironic and high honor (albeit one I just invented)—went to a nonfiction reading by an author promoting her services as a past life regression therapist. She and a man read dialogue from a prior therapy session, and it was exactly as bizarre as you’re imagining.

Which is to say delightful in its existence as irrefutable proof that open mics, where such a thing can happen, really really should exist.