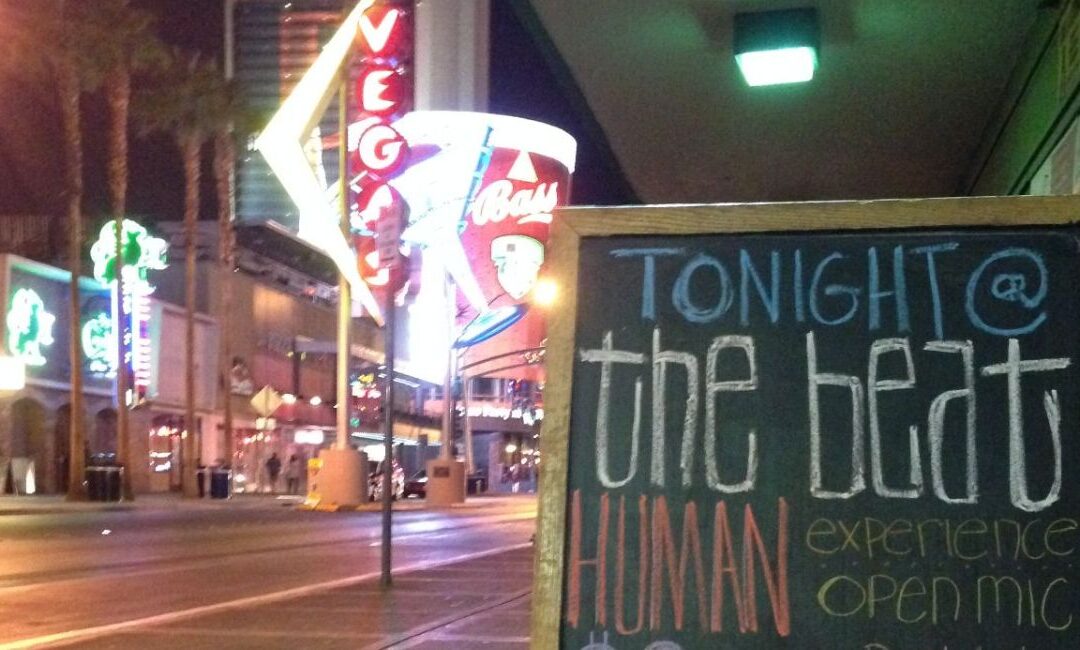 So it turns out there are places in Las Vegas that don’t serve beer all day.

The Beat Coffee House, located in collective arts space called Emergency Arts (because, as one local told me, it was once a medical center) on Fremont Street, is one of them. It’s a terrific space, with plenty of chairs, good food, and (after 7 pm anyway) beer.

The Beat is home to an artists’ community and open mic event called The Human Experience, which happens every week. Lucky for me, a trip with my sister  crossed a Monday and although last-minute flight changes and gate agents in bad moods delayed me some, I was able to make it.

30 Slots and a Show that Starts on Time

Five-minute slots starting at 7 and running until midnight, with time for a featured performer and a 15 minute break—so room for more than 30 people.

Hosted by a pair of excellent emcees—the kind who always have something positive and relevant to say after each performer, the kind who bring their own, solid material but don’t make the show about themselves—the show started on time and moved along at a quickstep.

(Like every other open mic, this one had performers who proved mysteriously unable to count to 5 or rehearse beforehand or take a hint from the timekeeper. But not many. And even a long five minutes is still only about five minutes.)

There was more spoken word—poetry, fiction, and occasional ramblings that defy any genre (unless solipsism is a genre)—than music, but not by much. And nearly all originals. In 3 hours, I heard only 3 covers total.

And my favorite: a dandy old gentleman in a lime shirt, red jacket, and sparkly blue bowling shoes, who brought a little talkin‘ blues.

I left happy and inspired, like I always do. But this time I also left wishing I had a stage name to stand up with the likes of Tomcat, Bullshit Man, and my absolute favorite, José Pancakes.

So if you have any ideas, bring ‘em on.

And if you’re in Las Vegas on a Monday looking for variety, originality, and a helluva show, skip the casino shows for one night and go join the Human Experience.