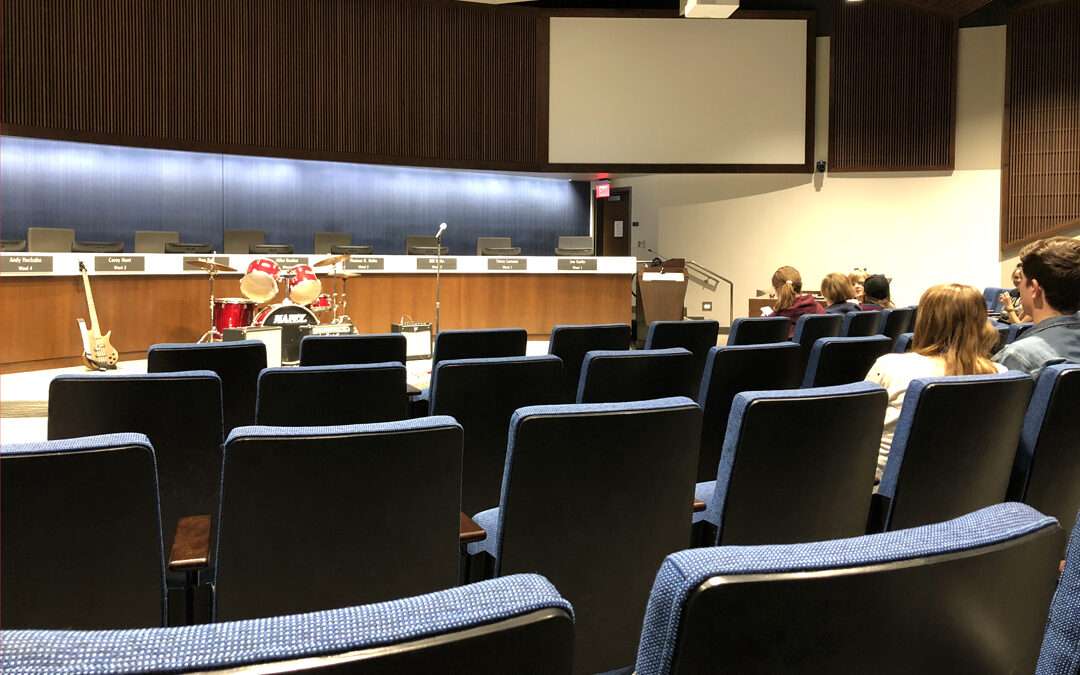 More than once—okay, often—okay, most nights—when I walk into an open mic or a slam (especially a slam), I’m the oldest poet in the room. Sure, I’ve surrendered the title a few times to a white-haired hippie or a retiree who hasn’t lost (or perhaps recently found) her fire. But there’s usually 15-odd years between me, Den Mother to the Universe, and the performers and audience.

The feeling is familiar enough by now, it wears like a good sweatshirt. Easy, timeless, and settled. So it goes for the performance poet over 30. Or 40. Or…

Just trust me when I say it wasn’t awkward to walk into Lenexa City Hall for the Sunflower Poetry Slam and find that the line-up was all high school students.

Honestly? It was kinda cool.

What if There’s a Fire?

Organized by English teacher Caroline Ewing, the event launched in late 2017 with co-sponsorship from the Lenexa Arts Council.

It’s $5 at the door, starts with an open mic to warm up the poets and the room, then moves into a 3-round elimination slam. Judges are picked randomly from the audience. Winner takes home $50.

Like a good host, Caroline knows her audience and, more importantly, she loves them openly. The slam is, she made a point saying, “a safe and vulnerable space,” and the performances testified to how much the poets trust her and how much she’s taught them to trust their own voices.

Aside from one moment when she suggested a barefoot poet really ought to put her shoes back on because “what if there’s a fire,” Caroline the teacher ceded the night to Caroline the host and like the best hosts I’ve seen so far, made it all about the poems.

Topics spanned break-ups (lots of break-ups), eating disorders, anxiety, life as a second-culture kid, cat people vs dog people, depression, parents with addictions, and what it means to be feminine. Oh, and cauliflower.

Yes, these were young poets writing some pretty angsty poems, but it was a thoughtful angst. Examined deliberately and well under the bifurcated lens of personal expression and literary device.

For all of this there was space, and a roomful of listeners, and in the back a Love Chorus of kids who declared their adoration and support for nearly every poet as he or she took and left the stage.

Aside from me and a fellow poet-over-21 (and that night’s Sunflower Slam winner), there were only a couple other attendees for whom high school is a memory—including one Sheri “Purpose” Hall, who brought the voice of an experienced slammer to the room.

Once again proving that when you do the open mic thing, you never know who you might hear.

Given the personal and intimate nature of the poets’ work, Caroline has mastered the host’s art of acknowledging, when necessary, that we all just shared a close and raw moment and shifting the energy by, for example, telling bad jokes or polling the audience on timeless and critical questions like whether Oreos are better than Chips Ahoy.

It was deftly done and I loved her for it.

I also loved that she’d arranged for a musical intro and break here and there by the Stinky Hooligans—a retro-grunge band made up of students and graduates of her 4th hour class.

I’ll give you a minute to process that.

When it was all over, our winner was called up to complete a W-9 form so the City of Lenexa can report his prize as taxable earnings—a first in my experience and quite possibly the only slam in the nation that renders unto Caesar.

The teenage poets mingled with each other and with us, and Caroline sent everyone off with a parting benediction that one hopes having a poetic outlet renders less needful. But just in case, kids…