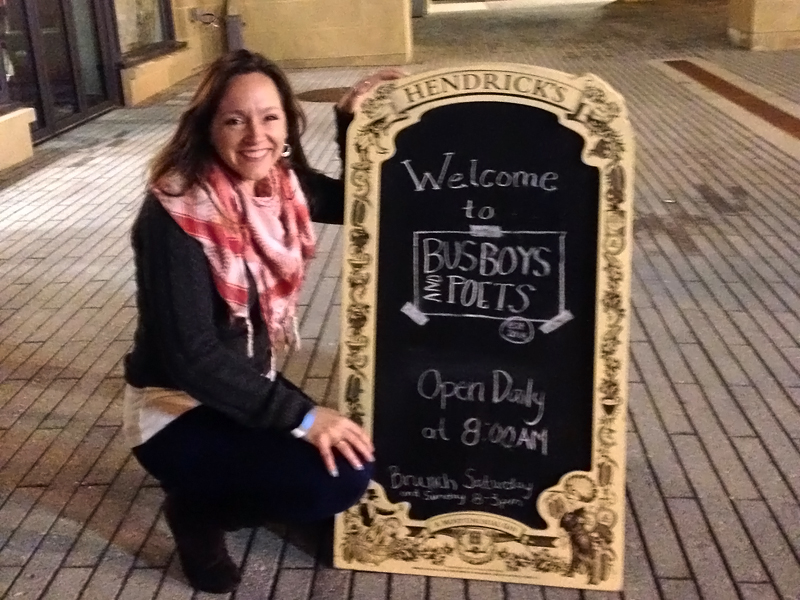 If its name and tribal statement weren’t enough to grab a poet by the shoulders and steer her inside, the incredible schedule of poetry events surely would be.

Across its 6 locations, Busboys and Poets offers up an open mic every weeknight, making it easy to work in a bonus stop on my quest during a spring break trip with my kids.

If you aspire to hosting an open mic, Drew Law, host at Brookland the night I went, is one to study. He was hilarious, damn quick-paced, and always positive.

Attached to the restaurant, Politics and Prose bookstoreHis guidelines were simple enough: 5 minutes, all types of talent welcome, no hate speech. He asked that we give the audience a warning before launching into a sexytime poem, and suggested we consider our moms’ sensibilities a litmus test for content.

His strategy for enforcing the 5-minute rule is the Slow Clap—as seen in movies about underdog sports teams, when the coach concludes his half-time speech and the injured hero claps one time, then to be joined by his rival in what ultimately becomes thunderous fervor.

This way, he said, “you get kicked off stage with applause.”

He walked the audience through all the ways to show appreciation for a poet—finger snapping,  humming a “chocolate goodness mmmm,” other vocalizations. He created space between performers—what my former cohost liked to call mental sorbet—with American-style “haiku commercials.”

In all, the show lasted about 90 minutes, with a solid feature set by Mightier Than Swords, the American University slam team.

No surprise, it was mostly young poets mostly invoking lost love or staking claims to their identity—verbal police tape poems to say, I am the authority on my life and these are my boundaries. Do not cross.

Many a great line was dropped, many altogether too fast.

To my ears, the best poet of the night was the closer—sort of a reverse take on the traditional sacrificial poet—Pages Matam. He continued the haiku thing with what he called Drake-u (a kind of hip-hop equivalent to emo, I gathered) and shut down the night with a code-switching, accent-shifting tribute to African mothers, particularly his own, the world over.

If I were rating open mics, I’d give this one my all-time highest marks for atmosphere and audience enthusiasm. What you’d expect in a venue that started with poetry as an idea, with a stage in its blueprints.

As Law put it, if you like social change and vegan brownies, Busboys and Poets is the place for you. Me, I’ll pass on the brownies, but please wrap up some of that poetry to go.

That oughta convince one or more of my fellow open mic lovers back in Raleigh to come along with me to Shirlington.