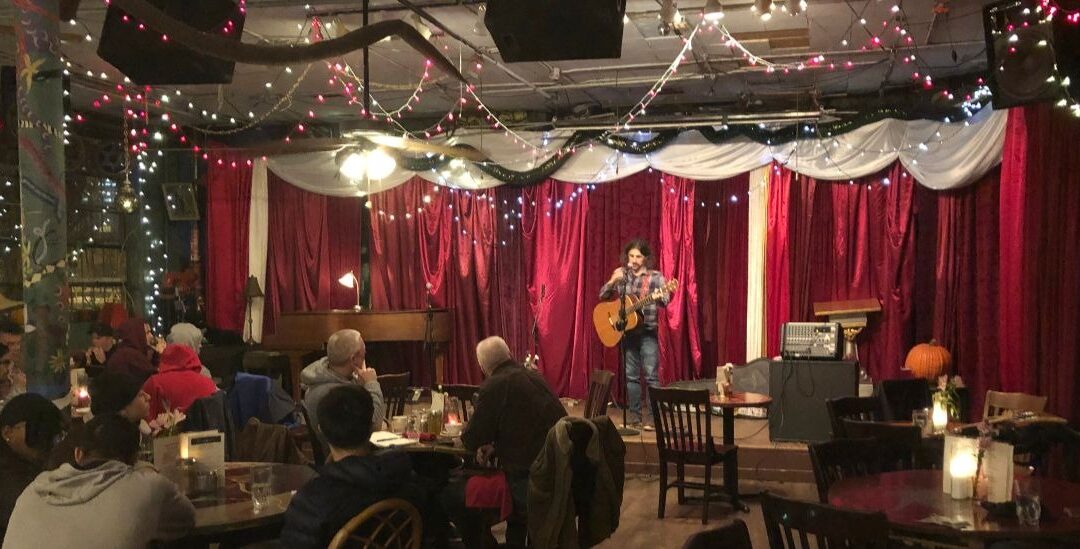 Think of a thing you love doing.

Sailing, maybe. Or knitting. Or bird watching or baking or basketball. Whatever.

Random dude #1: Y’know, you can do 3 more hours of that thing over at this other place.

Call me a zealot, but it seems I’m the sort who would, and did, and was happy as hell about it in Denver….when, after a comic-heavy open mic at Rising Sun Distillery, two of the other performers pointed us around the corner and a couple blocks up to The Mercury Cafe.

Now, I’ve had my eye on Mercury’s Friday all-poetry open mic for a good long time, but this trip wasn’t gonna cross a weekend, so I’d put a pin in that one in hopes I’d make it back out west sometime.

Talk about your happy surprises, right?

So, accompanied by two incredible sports—let’s face it, it’s a rare friend who’s up for 5½ hours of open mic in one night—I made it a twofer.

The Jungle Room at the Mercury Cafe is an experience unto itself.

Red velvet curtains flank the room to one side, much bedecked windows to the other. The tables are painted in a zillion colors, string lights dangle everywhere. And above and behind and along the top of the drapes looms a massive, stuffed and sequined snake.

It’s more than a little extra and perfect just so.

They’ve got a true stage, complete with piano, and quality sound for musicians. And the food is killer, too. Of my favorite poetry venues to date, only Busboys & Poets compares.

I didn’t get a chance to talk to our host, Herman, but my sense is that Wednesday open stage night at Mercury must be pretty long in the tooth. Because Herman spent no words on rules, structure, or intros.

Everyone who wanted to perform lined up at little table and drew little pieces of paper like we knew exactly what was going to happen.

Before we get to those little pieces of paper, let’s talk about The List.

Aside from setting the overall tone and setting each performer up for success, the most important thing an open mic host does is Manage The List.

At most open mics, the list opens at a set time, typically 30 minutes before the show. Performers must sign up in person but can put their name anywhere in the line-up, and that’s pretty much that.

The worst thing a host can do, IMO, is let people sign up by phone in advance.

Because that, friends, is not an open mic. It’s a bunch of the host’s friends having a cliquish lovefest. And it leaves people who don’t have the host on speed dial feeling like idiots when they arrive at the appointed hour and find the list already full.

So don’t do that.

The second worst thing is to randomize without telling anyone it’s going to happen. (I’m lookin’ at you, Oakland.) Because artists have lives too—early wake-ups for kids or work, for example. Or friends who can’t make it to the show ‘til later and really wanna hear their person do his/her/their thing.

So don’t do that either. 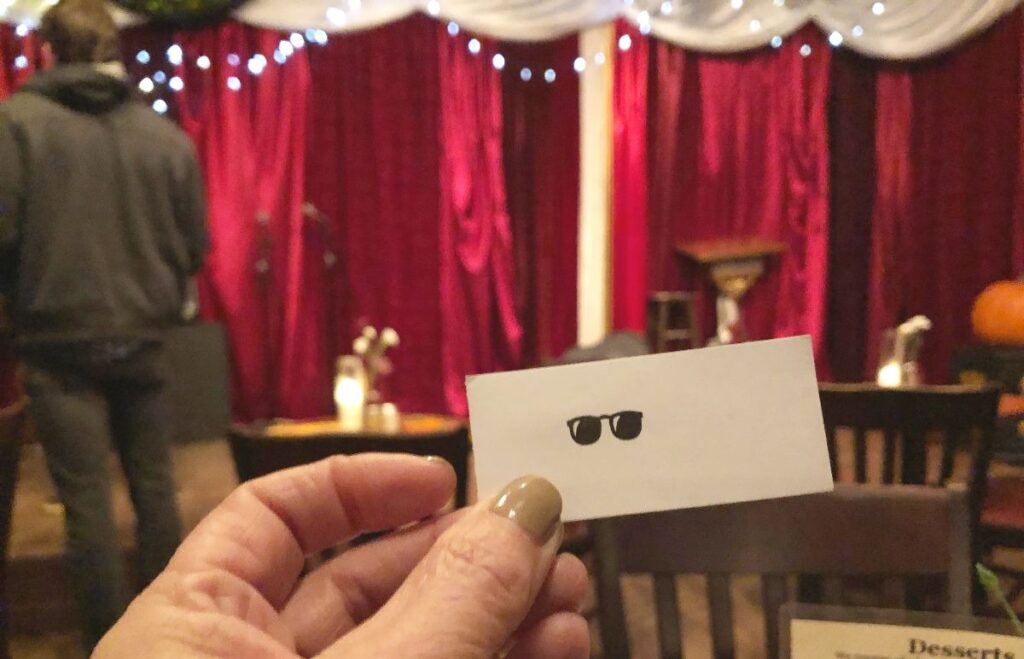 At the Mercury Cafe (at least on the night I went), they do randomize the list, but it’s totally above board. And kinda goofy.

In a good way.

Each performer drew a little slip of paper with a wingding on it and our host built the list by reading them out in order. As in airplane, bicycle, floppy disk, pirate, eye of Sauron, sunglasses…

Thus Herman built the list, all fair and no surprises, and got on with the show.

Aaannd on with the Show

Every time I hit a new open mic, I try to keep count of comedians, poets, musicians, and whatnot. But I’m easily distracted by a good Elton John cover and often lose track.

By my count, we had 9 musicians, 3 comedians, and 1 poet (yours truly). Unless you count as poet #2 the blonde hipster who walked on stage near the end and said, “Wanna hear some shit from my journal?”

Which is totally fine for open mic, but (in case you’re not sure) is not poetry. Poetry requires editing. Shit from your journal is, at best, rant or screed. More likely just spill. And quite possibly self-indulgent emo drivel.

(Same as in every one of my journals going back, um, 3 decades. That’s how I know.)

Setting her aside, the Award for Best Moment of the Night went to a young man named Gabe, who came out from the kitchen where he’d been washing dishes, took the piano and played a jazz standard and some Bon Iver.

Gabe displayed considerable grace when our favorite hipster-blonde inserted herself into his set, ostensibly to sing harmony, and pretty obnoxiously upstaged him.

So, yeah. Don’t do that either.

Wrap it Up, Anna

At that’s the end of my story about the time I did two open mics in one night.

It was a marathon of stimulation and I’d like to close with much love for my hardy friends and anyone else who’s ever come out to an open mic to see a friend do a thing they love.

Because sometimes it’s really nice to have someone to rejoin at your table when you step off the stage.

So if you get a chance, do that.