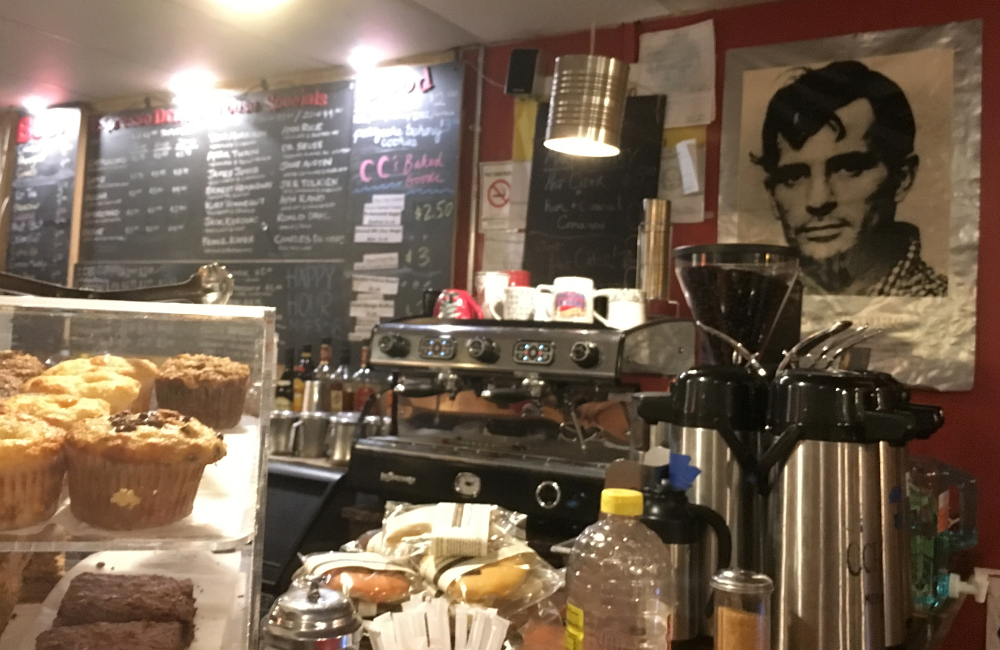 It’s not always easy to tell whether an open mic is going to welcome poets. My research often turns up nights geared toward musicians, sometimes comics. Sometimes they say outright whether other genres are welcome, but not always. But when the venue is named Kafe Kerouac, I figure it’s a sure thing.

Equal parts coffee shop, bar, and used bookstore, Kafe Kerouac may be the Absolute Most Perfect Open Mic Venue Ever…

For a poet, or at least for this poet, that’s some crazy kinda nirvana.

The Welcomes Get Personal

The night I went, the room was packed for what they call Writer’s Block Poetry Night—maybe 40 people, folding chairs all taken and people sitting on the floor and standing in the back. Given the proximity to Ohio State’s campus, no surprise there was a big college-age contingent and plenty of diversity.

Our host, Ms. Vernell, started the night off by welcoming all the new people. First collectively by show of hands, and then individually. As in, “I haven’t seen you before…what’s your name?” And in so doing, she deftly created a friendly little community for the night, for poet and audience alike, as my intrepid non-poet friends said afterwards.

One less customary rule: Sign-up order means nothing. Instead, the host determines who goes on stage when. Not usually something I care for, but I appreciated that Ms. Vernell seemed to make her choices deliberately based on what she knew of each poet’s style, and she mixed in the new people with the regulars.

Beyond that…well, let’s just say that State No. 20 on my quest offered up some things I’ve never seen before…

For one, in response to an unfortunate incident involving a poet (one Dwayne B. Rollin) whose phone rang while he was on stage, Ms. Vernell called to her fellow organizers to “find me something online!” and then commenced to institute a group punishment for Dwayne’s lack of cell phone etiquette. Said punishment was to read aloud an excerpt from what our host declared to be the worst writer of filth in modern literature, an author named Cairo, whose opus includes such titles as Daddy Long Stroke and Deep Throat Diva. (While he may not be the very bottom of the schlock-novel barrel, he’s gotta be close.)

We endured a 3-minute recitation from The Kat Trap, and all promised silently to keep phones on vibrate until our very deaths.

Another fabulously idiosyncratic turn came at what I assume was halfway through the list, when all three organizers came to the stage to raffle off the night’s door prize: free admission to the following week’s show.

What’s so unusual about a door prize, you ask?

Well, this one came with a group sing to the melody of some old childhood taunt. It went like this:

And with that matter of order dispensed, we moved on to round two.

Gotta say, I was right pleased to be called up as the first poet after the door prize interlude, what with the audience recovered from torture-by-Cairo and generally feeling better about ourselves. And if you’d like to see how it went, there’s video, courtesy of my friend Jake…

A Roomful of Characters

As the show progressed, it became clear that not only does Writer’s Block have a seriously committed crew of regulars, but that said crew is made up of some serious characters. In no particular order, there was

And then there was Uncle Rick, the Wizard of Writer’s Block (the host’s words), whose intro lasted twice as long as his poem and culminated in the entire room pronouncing him to be “The Essence.”

Seriously, they all said it.

After which Uncle Rick read a 6-line poem about existentialism and soda pop. (I couldn’t make this stuff up if I tried.)

Eighteen…Or Is It Twenty Years?

Lively as it is, no shocker that Writer’s Block Open Mic boasts a damn impressive run of 18 years, maybe 20 (the host and organizers didn’t seem to know for sure). It’s been at Kafe Kerouac since 2007, and if I were giving advice, I’d tell them to never move again.

And then I’d tell you to find a reason to go to Columbus and see it for yourself.