For a flatlander like myself, New England is kinda…well…confusing.

It’s hilly, for one thing. The trees are too many and, by Oklahoma standards, too tall, though I’m less addled by that after 20 years in North Carolina.

Worse, New England roads have a way of curving back on themselves. And taken together with the trees and the hills, it’s just more than my well-below-average sense of direction can process.

So, having learned my lesson driving to Maine a few years back, when I went in search of an open mic called Yorklyn Live in Delaware, I left the way-finding to Amtrak and Uber.

And based on the way both drivers struggled to find the place, I’m pretty sure that, had I driven, I’d have missed the whole thing.

Which would’ve been the textbook definition of a damn shame, because the venue—the Center for Creative Arts—is a cozy, paint-splattered pearl due west of Wilmington. Close enough to Delaware’s left border that when Yorklyn Live takes its show outside in the summer (which I was told they do), I bet Pennsylvania knows.

As I did with Birmingham’s Bards & Brews, I’ve been following this event for months. And mad props to whoever runs their Facebook presence, which upped my trust that if I made the trek, they’d be there.

(I know, I know, it’s been four years of solids since Maine, but the double-ghosting I took in Dexter  still stings a little.)

CCArts is a community center with a focus on the visual and performing arts. And it looks the part.

And every third Thursday, in the Esther Shallcross Marshall Gallery (est. 1992), CCArts hosts an open mic with a wholesome vibe like the Coffee House in Milwaukee, but with a dash of Las Vegas’s Emergency Arts.

The stage looks out over a big space with banquet-style tables and chairs. If you lift the tablecloth, you find on each table an abstract expressionist tribute to the oil and acrylic classes in which it has served. 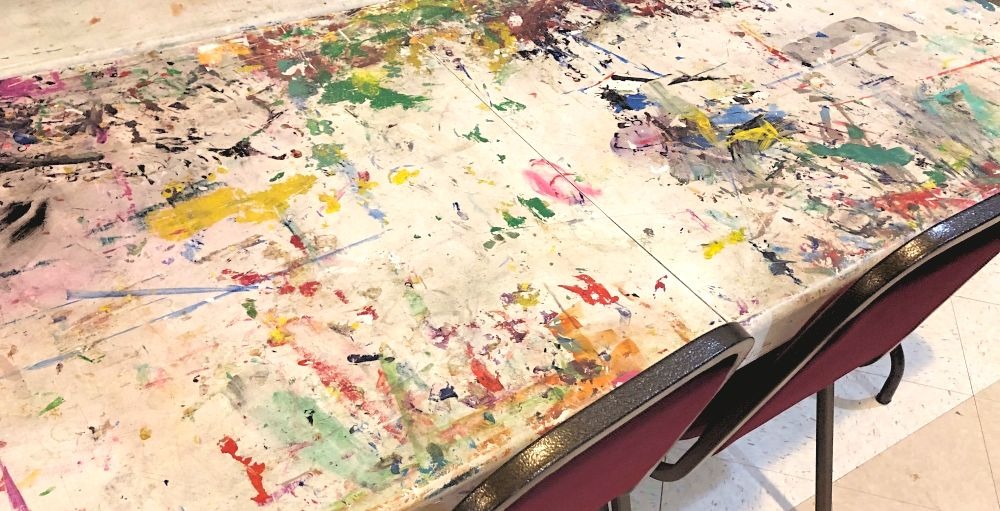 That night, the organizers had discovered a quaint street light among the excavated props and commandeered it to enhance the stage backdrop.

Which is to say, it was the perfect setting for random magic…by which I mean open mic.

As open mics go, Yorklyn Live offers everything a band could want—full back line, multiple mics and inputs, a bank of monitors, massive speakers, and a dedicated sound engineer (the delightful Paul Thorne, who also brings the beer, holds the reins on the welcome wagon, and sits on the CCArts board) sitting up near the ceiling in a crow’s nest of knobs and wires.

The structure is suited to bands as well, with generous, 15-minute time slots.

There’s a $5 charge for performers, audience gets in free. There’s beer and light concessions.

The regulars are friendly, welcoming, and receptive to a new voice in their midst.

If anyone had thought to bestow the honors, our host, Paul Boris, would’ve taken the award for best music pun Tshirt (which featured 2 staves, one in 13/8 and 5/4 time, with the legend These are Difficult Times) and best hat (jester’s motley with extra-long tails). No contest.

The night I went, we had six acts…

Turned out that the last person to sign up thought she was joining an email list, not signing up to perform, and she could not be coaxed to take the stage.

Boris warmed up the room on piano with a couple Vince Guaraldi covers and later joined me on stage, adding a little spontaneous color to my poems like The Futz Band does routinely at The Green Mill in Chicago.

(Have I mentioned how a poem read aloud expands when there’s music to unify the soundscape and create some breathing room?

Now go find a venue and broker a deal with a musician and see for yourself.

It’s worth it, promise.)

In a reversal of the usual, I’m pretty sure I was the youngest person—and folks, I’m 51—in a roomful of talented retirees who finally have the time to devote to music and the perspective and wisdom to have fun with it.

Two local bands—Dry Rain and North Town—played a mix of covers and originals, including a beautiful parable called “Chestnut Hill” and a tribute to a hospice nurse named Ruby Jones who, despite evacuation orders, stayed with her patients during Hurricane Katrina.

Ancillary perk of open mics: Some nights you learn things.

So if you’re in western Delaware or eastern PA and you haven’t been…well, your excuses are your own.

Because without places like this, the corners of the world they serve would miss out on all that color, and the scattered clans of callus-fingered guitarists and drummers with vans full of gear and obsessive poets and generous pianomen would remain scattered.

And as interesting as we are by ones and twos, we are even better in groups, playing and listening and getting ideas for songs and poems and plays and paintings and more.

Which is just to say, support the arts.