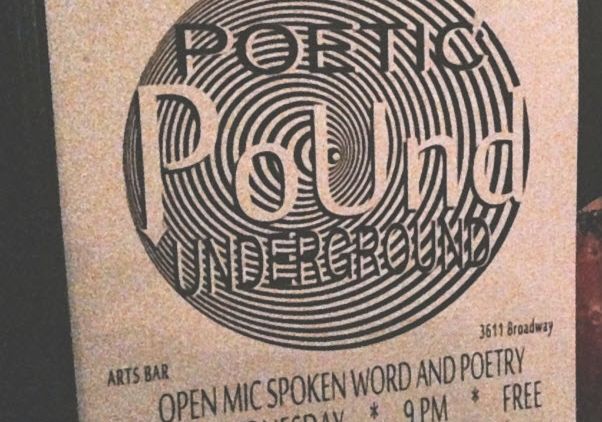 First, know that anything I say about an open mic is only true for the one night I went. These events are never the same, week to week. Together, the host, the performers, and the audience co-create the event every time and like I’ve said, anything can happen.

Including awkward things. That’s the norm. Anyone who makes open mic her thing must embrace this. And I do. I absolutely do.

I support first-timers and other nervous poets doing the hard work of finding their own style—copying what they’ve seen elsewhere, trying on the shabby coats of cliché, covering the much-traveled-by topical roads of identity and sociopolitical idealism.

I expect to see some bad behavior, some poems that fall on the thank-god-that’s-over end of the spectrum, and some performances that remind us all to be grateful each slot is only 5 minutes long.

But until the night I went to the Poetic Underground Open Mic at the Uptown Arts Bar in Kansas City, I would have said that the awkward, the self-indulgent, the juvenile—the outright bad writing you often hear at an open mic never dominates. That if nothing else, it serves to highlight how awesome the good stuff is.

It’s inevitable, I guess: On any list, something has to be the worst.

Maybe I should’ve seen it coming when the host said the theme was armageddon. Or when the bartender told me the host jiggers with the order of the sign-up list and makes sure any “big names” (which seemed to mean friends of the hosts) get to the stage quickly.

The night that ensued was a series of progressively lower low points, including

One terrible poem after another, and terribly performed.

If I had to pick a best moment, it would be when the bar staff broke the awful, awkward energy by crossing through the stage area, carrying pizzas and dishes to and from the kitchen. Honestly, it was so bad that if not for the fact that I had a witness (a fellow poet from NC) to corroborate, I would wonder if it was all my imagination.

Instead, I can wonder how this could happen. What force assembled all these people to this rather sad end?

Ultimately, I find myself blaming the two-person host team—whose styles were more than a little incompatible.

Not that the lackluster introductions made by the low-energy host (who seemed as much to be apologizing to the audience on behalf of the next poet than setting him/her up for success) would’ve improved the performance to follow. Not that the over-the-top introductions of the high-energy host were the sole reason too many poets shouted at us. (Nor can I really blame him for twice leaving the room, wandering over to the bar area, and missing his cues. Hell, I wanted to leave too.)

What I hold them responsible for is their apparently greater interest in catering to their friends than in curating the show as a whole. And for the fact that they have encouraged these people to keep writing and to come back—either in the service of extreme artistic egalitarianism or because they just don’t know better.

But again, I console myself with the knowledge that this was one night. For their sake, I hope next week will be better. For my own, that this was a hiccup in what’s been a great and lucky run of superlative open mics across 10 other states and the District of Columbia.

And that where I’m headed in Texas and Oklahoma will prove this was an anomaly.