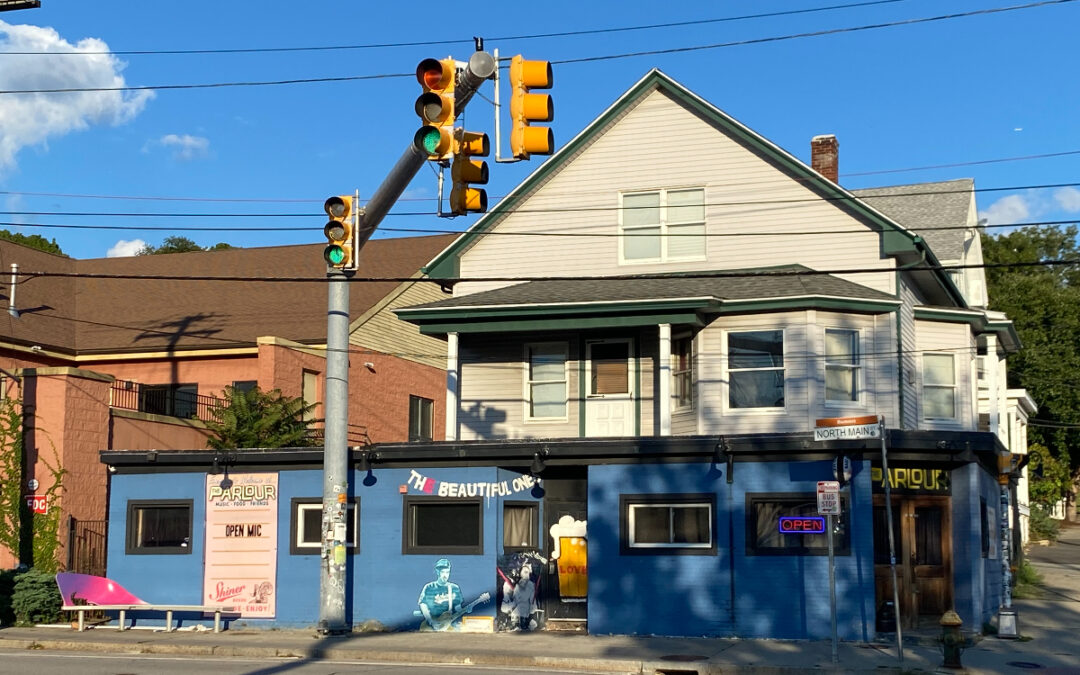 In a part of Providence called Mount Hope, at the bus stop where 3rd Street tees into HWY 1, there’s a funky blue building. Walking up, you’ll pass a bench painted bright pink, a sign that says “Music, Food, Friends,” and a light pole feathered in billets and stickers. You’ll pass a a couple graffiti portraits taking shape and a door that doesn’t open, with a pint of beer and the word LOVE painted on it.

And if you look up, dangling over the blacked-out window, you’ll see some leftover decor from a Prince tribute party calls out to The Beautiful Ones.

This is The Parlour.

Walk in the door that does open and it’s every bit a down home bar, as advertised—except maybe for the purple fairy lights twinkling from the ceiling tiles. The stage dominates the room, which makes sense because live music is their raison d’etre.

On Wednesday nights, stage and microphone are open to Providence’s amateur talent, with much-respected local musician Steve Donovan as host. The Parlour’s open mic welcomes comedy and poetry and other acts, but it’s very much a musician’s event.

By which I mean it’s the kind of show a musician wants as they get closer to being gig-ready.

Friends, I am not a musician (ergo my disproportionate focus on tips for poets). Yes, I run an open mic where lots of local musicians perform, and many of the open mics I’ve hit to date have been mostly music focused. But that’s not the same as being a musician, and I know it.

So to make sure any advice I offer singer-songwriters is solid, I ran this post by a professional musician who believes in open mic as deeply as I do.

Why take his word for it?

Well, he’s made a living at it for more than a decade, playing house concerts, bars, and huge outdoor theaters. He turned the end of the Earth into the chorus of a love song to the universe. He’s written the best goddamn song about laundry. And one day, in his living room, he did this:

And if you find fault with anything he’s vetted, he’ll sing you a whole song about how he was wrong.

So now that you trust us, let’s do this.

When your hobby involves rummaging around the internet for open mics, you learn quickly that finding one is easier going for musicians.

Sure, there are slams and other poetry-only shows (like Writer’s Block in Columbus and The Paducah Writers Group) where musicians take the backseat. For the most part, though, musicians can count on a warm welcome anywhere there’s a microphone. And as anyone born into capitalism can tell you, having more choices is mostly a good thing—but it does make it tougher to decide.

So if you’ve strummed and hummed yourself past the rank beginner phase, if you’ve wrestled that early stage fright into submission, if you’re liking how all that feels and you think you might wanna try gigging, it might be time to find an open mic like The Parlour.

So let’s get you a rubric, or at least a few signs to look for, to help you do just that…

1. The host is a musician

When I asked other performers at The Parlour about the show, more than one named our host as the reason they came. And I get it. We gravitate to people we want to emulate. And from the host’s perspective, we lean into what we know.

If the host sings or plays, they’ll know what you need. If you get the chance to ask, any advice they share will get you closer to where you want to be. And they’ll attract other strong musicians, elevating the talent in the room and giving you even more examples to follow.

2. The venue is all about live music

The shows I’ve done at live music venues like The Parlour have All The Gear—mains, monitors, mixers, etc. Way more than the typical coffee shop or art gallery open mic. (No lie, Joe’s Grotto in Phoenix even had a smoke machine.) And if you don’t know how to make all that technology work to your advantage, a musician’s open mic is a fine place to start learning.

The presence of professional gear also means the venue has a sound engineer. And that’s a creative relationship any gigging musician should know how to negotiate.

Oh, and did I mention purple fairy lights? 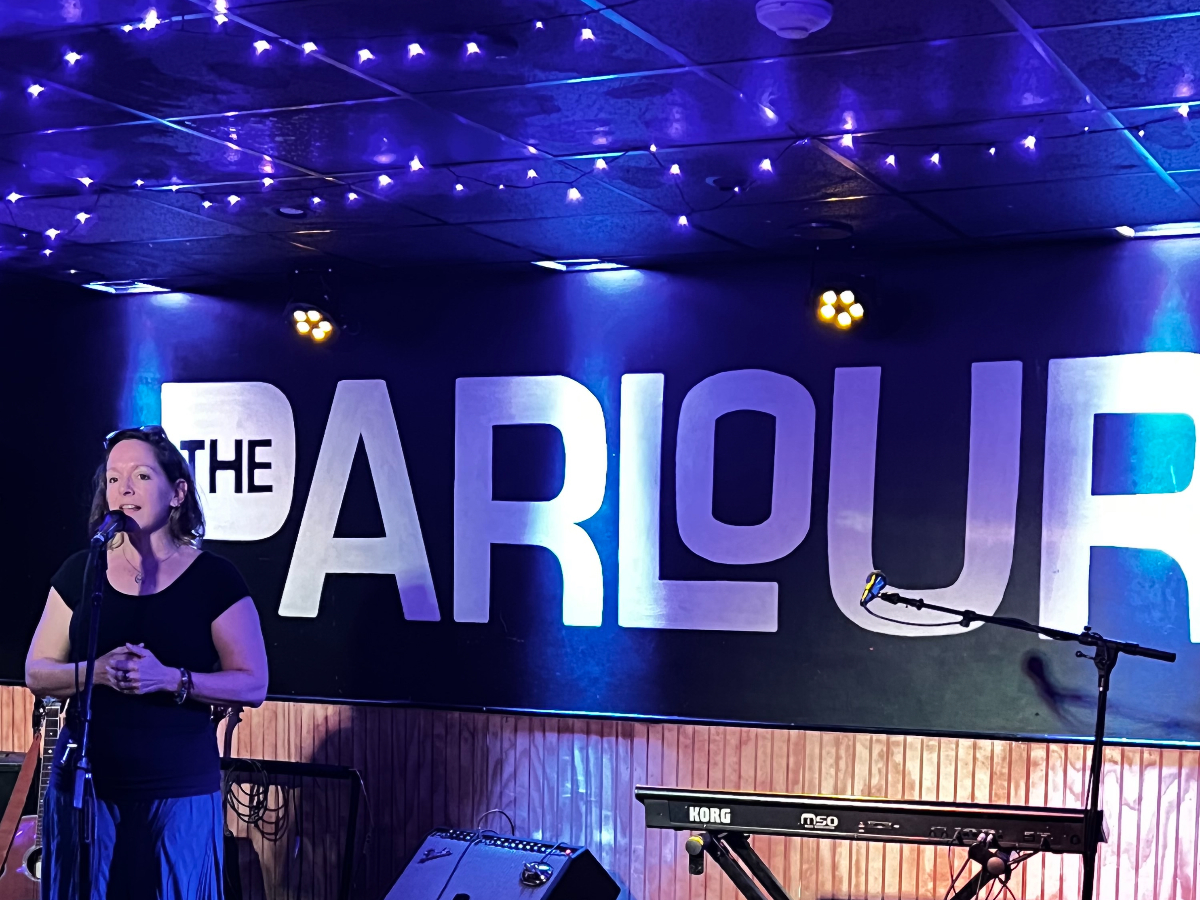 Long slots like The Parlour offers are basically a glowing neon sign that says “musicians, this will be worth your while.” Not just solo musicians, but full bands. Because if you’re gonna do all the set-up and sound checks, you want the chance to play more than one song.

So whether you’re a lone gal with guitar or a 10-piece ska ensemble, 15 minutes gives you the chance to practice some critical gig skills, like structuring a set and guiding and responding to swells and ebbs in audience energy.

Special aside for poets: For the love of Apollo, do not overstay your welcome at a musician’s open mic. If the slots are longer than 10 minutes, cut the time by half. If you don’t, the next time you come back, you might find the event rechristened as the No Poetry Allowed Ever Open Mic.

The more instruments you see on stage—guitar, bass, accessory percussion (for those more-cowbell moments)—the more musician-heavy the line-up will be.

If you play covers, it also means there’s probably someone in the room who could jump in on your set, rounding out the sound on bass, drums, fiddle, maybe even harmony vocals too. Someone who’s got connections at bars you want to play or is in a band that needs a player just like you or maybe—just maybe—someone who could be your musical soulmate.

Trust me, friends, you never know where a spontaneous duet might lead.

What else you can learn at a musician’s open mic

As with any skill, you learn more at open mic from what you do than from what you observe. So if you want to become a better performer, you gotta play.

But make no mistake, if all you do is play and leave, you will miss out on a lot. (PS. Also, that’s rude.)

Because The Parlour — and open mics like The Parlour — attract both talent and experience. (I mean, if a musician says, “Can I have less of me in the monitor,” they must’ve been at it a while.)

Not only are they likely to be strong players and singers, but they’ve probably honed other skills that beginners who aspire to gig will need to cultivate, like…

These are players who know how much an audience loves a callback to something that happened before they came on stage.

Hell, maybe that callback will be aimed at you.

So do the thing already

If this sounds like something you’re ready for and you happen to be in Providence on a Wednesday, go to The Parlor. If not, find yourself an open mic like The Parlour.

Pull together your 3 strongest tunes and show up early—because at any great open mic, the list fills up fast.

Stick around after your slot and pay attention. You’re all but guaranteed to pick up some useful tips. (Even if your notes-to-self wind up being things you don’t wanna emulate—and I’ve been to shows like that too—that’s still way handy info.)

Better yet, make friends and ask questions. Your fellow players might be far enough along to know whether—and when—and how—to give another musician a little constructive feedback.