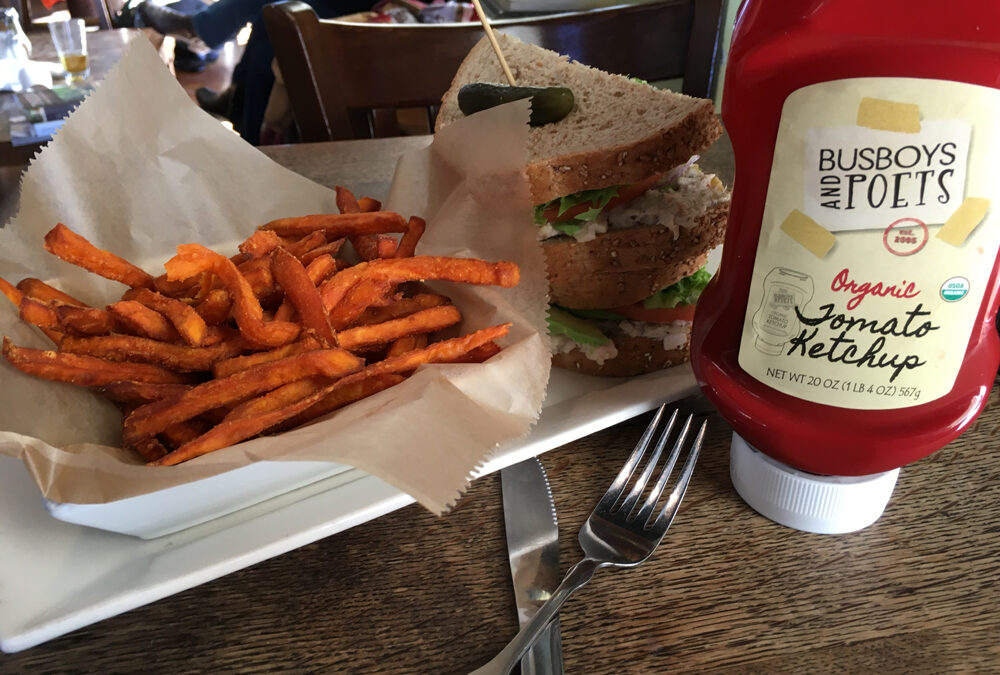 So I came to Hyattsville with pretty high expectations. After my first Busboys and Poets experience, I think I had good reason.

I mean, poetry is right in their name. It’s at the core of their concept. There are quotes from Langston Hughes and Maya Angelou printed on the menu. Hell, they have their own ketchup…made with whisky, death, and moonlight.

Seriously. It’s on the label.

And no doubt, the show had all the hallmarks of a good open mic. The host, Rebecca Dupas, was a textbook pro—preshow run-through of the rules, funny and positive intros that set up each performer for success, brief but clever banter between poets to clear the air.

Hyattsville’s poets certainly seem to be all about it. The room was packed, show sold out by late afternoon.

(Listen, poets, if my blog has a single most important take-away, it’s that the aspiring open mic tourist must develop a solid relationship with linear time. No matter how late your local open mic tends to start. No matter how uncool you think it looks, people…   Show. Up. Early.)

The crowd was there for poetry and music. The food was awesome. Candles on the tables. Dimmed lights, so we can “get a little grown,” as Rebecca said, “if not necessarily sexy.”

But even with all that. All the good things and the sine qua nons in place, somehow, it didn’t match up to the idiosyncratic places I’ve enjoyed most on the tour so far. Places like Norfolk’s Venue on 35th, the Red Dirt Home for Wayward Poets in OKC, and Mic Check Poetry in Bryan, TX.

Maybe it was too perfect…too slick…too fond of itself. I dunno.

The poets were fine—about half women, which is unusual, covering the usual topics and ranging from hyper-sentimental cliche to skilled rhyme and flow. One musician was amazing. A couple poets forgot their lines.

The crowd loved the ones crowds like that usually love, totally missing the density of one quiet poet’s verses and mistaking shouting for profundity.

Maybe that was the issue.

Add it all up, and I give it a C. Maybe a C+ if I factor in the performer who went by Omo Spokenword…

Not quite the highlight and not hardly the lowlight, Omo was more like the weirdlight of the evening. Wearing sunglasses and a hoodie, he came on stage doing a Rocky Balboa warm-up and proceeded to over-enunciate his every line.

Whatever his poem was about, it mentioned a colostomy, an atheist, and the Bill Maher Show. With those and other images stitched together with a repeated chorus of beat-box chicken sounds. Not to mention Omo’s power-squat dance moves.

He was bizarre, sure. But more importantly Omo was unique. He didn’t tell us anything we could’ve heard (over and again) at any slam or spoken word night in any other city. He didn’t emulate the style of every rant-poet with a predictable message of social justice or girl power or identity.

He caught us off guard. He got us laughing and he damn sure had me leaning in for more, wondering—because it wasn’t obvious—what he might say next.