12 Tips for Open Mic Hosts: How to Be Flexible, Fair, and Fluid 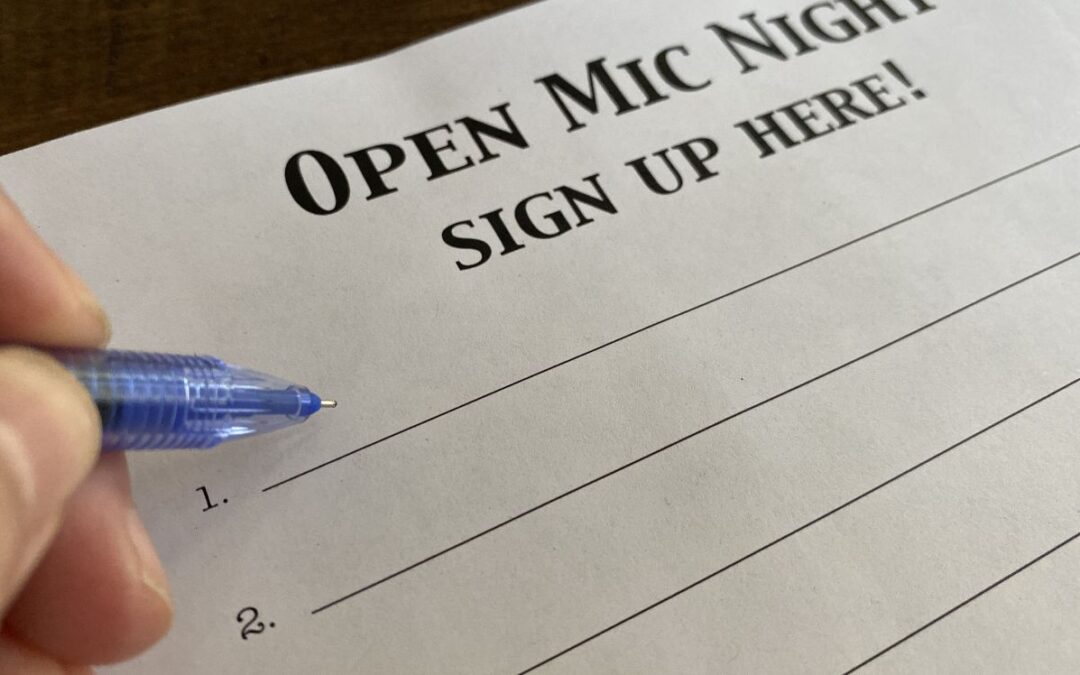 Let’s say you host an open mic, or you will soon, or you want to. I’m gonna assume you’ve done your time as a performer: You’ve seen good hosts (let’s hope) and maybe a few bad ones (equally instructive). You’ve got ideas. You’ve got opinions.

But maybe you’re looking for a few tips, say, from an avid open mic poet who’s been around? Not that you need all of them, of course. You’ve seen a lot. But maybe, just maybe you haven’t seen it all and there’s one or two small adjustments—reminders, really—that could help.

Lucky for us both, I know a been-around kinda gal (in a strictly open mic sense, of course) who’s equally opinionated and also really likes taking notes and making lists…

Hence this collection of techniques I’ve appreciated at 35+ open mics across 25 states. If you’ve been doing this a lot, some are obvious, sure, but maybe some are new…or just new to you.

Put your sign-up list on a table in plain sight, or give it to your co-organizer. (If you don’t have a co-organizer, get one.)

Refer to the list often and remind people where it is.

2. Give performers a heads-up

Tell everyone who’s up next and who’s on deck. Or announce a block of 3 performers at a time. This is more important if your open mic welcomes musicians (guitars seem always to need tuning), or if the distance from chair to stage takes more than a few seconds to cross.

3. Remind us of the rules

Yes, every time. Unless you are absolutely certain there’s not a single new person in the house, in which case move along with the show.

4. Enforce the rules, but change up when necessary

Rules keep things consistent. If your slots are 7 minutes, hold them at 7 minutes. If you threaten punishment for anyone whose cellphone rings—not something I recommend, but I did witness it one night in Columbus—well, make it happen (but be quick about it).

But let’s say the list is thin one night. This is a good reason to change up your open mic format:

But tell us what you’re changing and why.

Trust me, there’s almost always someone who walked in thinking “I might,” and after seeing how warm you and your open mic audience are, started thinking “I totally would.”

Give ‘em a nudge.

Randomizing the list means changing the order in which people signed up to perform.

It’s obnoxious. It violates expectations, throws poet and musician off, can put a first-timer at a disadvantage by forcing them to perform early in the show before they’ve had a chance to get their sea legs, and can pretty easily create the perception of favoritism and cliquishness.

If you want or need to change the order, check with the performers affected.

Sometimes you get a special request. Someone needs to leave early or run back to his car for an E-flat harmonica. Or maybe you want to stagger musicians and poets (which can really help the flow).

Typically, people don’t mind a one slot bump up or down, but don’t be a dick. Ask them first.

And damn surely keep your ass in the room. It’s hard to believe, but I’ve seen hosts step out while people were performing, then miss their cue to back-announce said hapless poet, rush to the stage (fresh drink in hand), unsure what just happened and gurgling for something smart to say.

7. Be especially nice to first-timers

Like, Kennedy Center Honors speech nice. And not just because they’re nervous. Hell, your regulars probably still get nervous. But for a newcomer, a little extra applause this time will encourage them to come back…and that’s the only way they’ll get better.

And if they get better, your open mic gets better.

It’s like adding happy slices of roasted peppercorn talent to your open mic sandwich. And eating it while watching the Kennedy Center Honors.

As I learned in Kansas City, if you reward drunk assholes and people with no sense of time or taste, you’ll get more of the same next time.

Cut them off, mock them (gently), follow their acts with timely reminders of what you and your audience came for.

This is your show. Don’t let them turn it into something you wouldn’t want to go to.

9. Say something, but not too much, between performers

Keep it positive (duh) and be specific with your comments. This proves you were listening.

And always repeat the last performer’s name. S/he probably forgot to do so and whether the work was good or bad, we’re all wondering.

Wanna get better at this? Here’s 5 lessons from improv that will help!

10. Find a way to involve the audience

Encourage singalong (we love ’em at Tongue & Groove). Or, like the awesome folks in Paducah, pass around a notebook so everyone can write a line in a group poem. If people feel like they co-created the event, they’ll be more likely to come back (and bring friends).

Assuming you’re a poet or musician (and most hosts are), take the sacrificial first slot or be the intermission. It’s fair. And your regulars and your audience probably like your stuff.

Or…if you’ve created a culture of default acceptance, your open mic is a good place to stretch yourself artistically. So if you’re a singer, recite a poem instead. If you’re a poet, tell a story. Find that beginner’s thrill—and empathy—all over again.

But don’t bend the rules for yourself. If no one else gets to read a third poem, neither do you.

12. Above all…don’t make the night about you

Take a cue from the inimitable and inspiring Madison Mae Parker, who said of her slam, “This is not the Maddie Mae Show starring Maddie Mae.”

The whole purpose of your open mic to give others a space to bring their work.

Be true to that and, almost without regard to the other details, you’ll get it right.